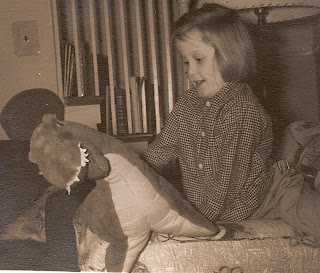 You have to work at it to find Christmas, but it’s worth looking for. If it weren’t, its absence wouldn’t hurt so much. Because what we are looking for has something to do with our childhood advent calendar with the little doors opening one by one, the mechanical store-window displays seen from Daddy’s shoulders, the choirs with candles, the green plush dinosaur under the tree, the eyes springing open at dawn and the bounce bounce bounce on Mommy and Daddy’s bed. But familiarity robbed us of our anticipation long ago. The sorrow starts younger than you let on, if you’re good; you tuck the secret away in your gut, that you aren’t as excited as the grownups are counting on you to be, because you already know it’s your job to pull them through their own loss. You pretend best you can, you light up your eyes to see theirs shine too. And that tiny, well-meant deception puts you on the road to one of life’s most faithful disappointments. 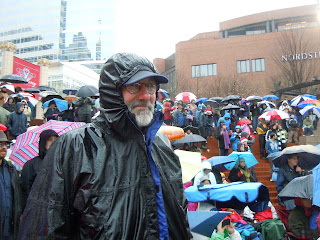 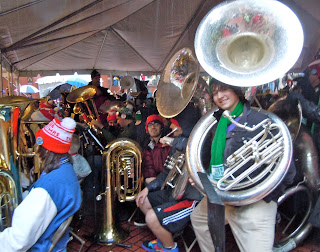 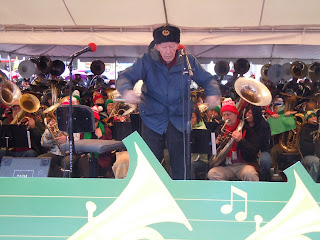 That’s outdoors in the square downtown, the one some child whose joy is gone tried to blow up a few weeks ago. It’s December in Portland; it’s dumping rain. There are over two hundred tuba players of all ages there, scavenged from all over town and corralled under a canopy. We watch as, with some difficulty, an antique conductor is installed on the dais. He is revered by the musicians, many of whom he has taught, and they smile at him with love and embarrassment. This is the highlight of his year, and he wants to talk. He wants to talk a lot, to teach some more, and to crack wise with comic timing honed in the nineteenth century, the punchline expected later in the month when the stage comes through. And we citizens of Portland stand in the downpour, our shoes filling with water, screaming inside tuba tuba tuba, and we smile in his direction, until finally he totters around to face the players–no–he turns around again, he forgot to mention something–and then, at last, he slowly lifts his arms and releases the tubas. There are virtuosos, but it is not the nimblest of instruments, and a large and democratic volunteer force of them is best reined in at a safer speed. Still, they are magnificent, even while lumbering through Joy To The World, even if Deck The Halls is done as a dirge. Magnificent, I say, the big marching tubas hoonking away in the rear like a troupe of flatulent mastodons; and the crowd politely covers their smiles when the antique conductor’s pants fall down and he is assisted by a spectator in the front row. 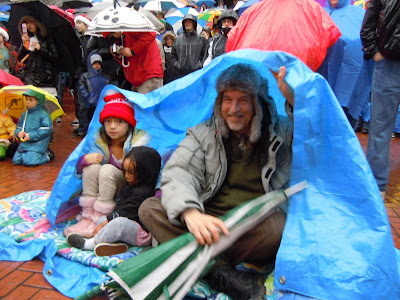 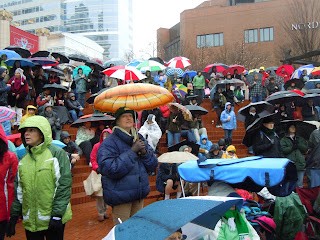 There’s an attempt to get the crowd to sing along, only to our horror it is not “along,” but a cappella, our verse framed but not accompanied by tubas. The conductor is under the canopy and hard to see, and the pace the tubas have set for us is glacial. The angels we could hear on high, who couldn’t see the conductor at all, had to wing it. Other factions selected their own tempos according to how cold they were, and by the time heav’n and nature sang, the group closest to the conductor had been lapped twice. There was nothing professional about it, any of it, and when the conductor remembered an interesting historical footnote and laboriously turned around to inform us of it, I looked back at the audience: every one of us wet as muskrats, children stomping puddles as quietly and decorously as possible. You could try to think of rain as God’s tinsel if you want, but it’s cold, and hard to festive it up. Yet everybody is smiling patiently, jiggling for heat, because not one would deny a kindness to an old tuba player at the close of his life; it’s the bookend to our first Christmases, and it’s what we have to give. And when the tubas break out in the most magnificent hymn of all, a hymn with the majesty to match the tempo, there’s a moment in it: the soaring come and adore him, born the king of angels, the measure where your voice and your heart both break at once. That’s your childhood shining through the fracture. It’s okay to weep for it. 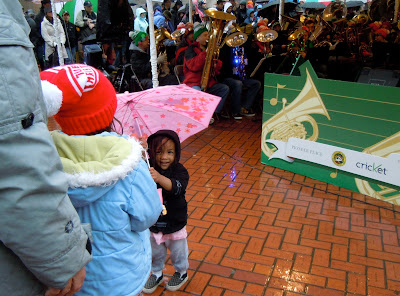