Cisgendered, And It Feels So Good

So it was a couple weeks ago I first saw someone refer to herself as “cisgendered” and had the usual reaction (“what now?“), and the prediction, made to Dave, that although I’d never seen this word before, I would now see it several times within the next week. Actually, I saw it twice more that same day.

I looked it up, of course. I don’t mean to be disrespectful with the “what now” reaction, but there is a rather large range of ways of being human, and more and more words all the time to slice the human experience into its component wafers, and it can be a little overwhelming for those of us who still routinely leave one ingredient out of a five-ingredient pie.

“Cisgendered,” a new coinage, refers to the state of feeling pretty much like the sex everybody always thought you were. In other words, “reg’lar.” And at first it would seem one didn’t really need a term like that, but, of course, the point is to drive home awareness of the existence of other ways of being. Which (the awareness) is a good thing. “I’m cisgendered, and you’re transgendered” is thus a replacement for the more common thought “I’m a man, and you’re just weird.” It’s a little like if we started calling ourselves “colored” so as to become more mindful that some people are albinos.

I probably got an introduction to the concept of transsexuality earlier than most in my generation. Nobody used to talk about it as much as we do now, but I learned I had a transsexual aunt when I was sixteen. I never had trouble accepting that there were people who did not feel any allegiance to the sex they were told they were, because clearly that was the case, but I didn’t quite understand it, either. And not because I felt so strongly that I was a girl, but because I didn’t. 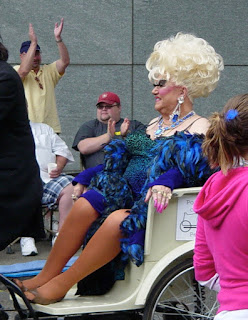 I kind of don’t care, either way.

I certainly never felt like a boy. But I also had no interest in the sort of things girls were expected to do, or be. Pink horrified me. I was not a tomboy, or at least not a good one. Couldn’t throw a ball. Couldn’t get too far up a tree. I did like catching frogs, but I’d never have tried to frighten anyone with one (out of consideration for the frog). I had a huge collection of stuffed animals and every single one of them was a boy, except for one that was handed down–a bear with a rubber face and eyelashes painted on–“Mrs. Teddybear.” Mrs. Teddybear was the least interesting animal I had. I loved my own mommy but the prospects for females seemed dull.

When I tried to imagine what it felt like to be a girl, whether “in a boy’s body” or not, I couldn’t come up with much. Even now, if I were to prioritize a list of adjectives that described me, my sex would come pretty far down the list, and I’d put it in just to help you recognize me at the airport.

Maybe my confusion is because I’m so very cisgendered, but I don’t know. I tend to see my life as an adventure with a frame of mortality around it, full of opportunities to create and to revel in Creation, and the suit I get to wear for the ride feels irrelevant.

There’s a flap now over Bruce Jenner’s transformation to Caitlyn and in particular his introduction in a high-glamor shot. (I did find myself thinking: what 65-year-old woman is named “Caitlyn?” What’s wrong with “Debby?”) I used to be put off by done-up women, myself. Forty years ago a friend put it this way: “I don’t like female impersonators, and I don’t care what sex they are.” I thought that was cute, but it’s not really true. I think male female impersonators are a lot of fun.

So it’s fine for Caitlyn, and all the rest of the hair-dying, skin-slathering, Spanx-wearing, made-up women in high heels out there. I just don’t really get it.

I would, just once, like to be able to put on a nice blouse and skirt and have the right shoes for the outfit, all at the same time. Just once.