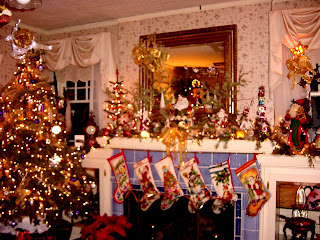 On a recent Saturday night, Dave and I had the honor of being invited to Linda and Pete’s family Christmas party, even though we were not in that particular gene pool. The house sparkled. There were little lights everywhere, robotic Santas, greenery, candles, creches, figurines both holy and not, and, in short, the halls had the living hell decked out of them. There’s a point at which such decoration is said to be overdone. Turns out that if you go a little past that point, it’s all good again. I loved it. At our house, we hadn’t even managed to put up a tree. We had Christmas dinner for twelve without bothering to locate so much as a sprig of holly. I adore Christmas and had always assumed that, when I retired, I would do it up fine, but instead I’ve discovered that I really prefer to visit it elsewhere and leave all that crap in boxes in the basement at home. I like to think of this as being efficient with my time, but there’s probably a better name for it.

Linda and Pete’s tree was set up on a round table, and a small train set encircled it, the choo-choo chugging gamely around three or four times a minute. The entire set-up was resting on the chin of a wide-eyed, four-year-old boy. Or so it seemed: his lower lip was planted firmly on the edge of the table, and his eyes followed the train around the tree, unblinking. He was not a remarkable boy in any way, save for his spiffy cowboy boots, which were on the wrong feet. “They’re the only feet I have,” he protested a little irritably, loathe to be drawn away from his vantage point an inch from the tracks. Later in the evening, the boots had been transposed, so someone must have been looking after him. He briefly volunteered his name as Colby, without taking eyes from the train or lip from the table.

The small house was fizzy with excited but well-behaved children, all apparently cousins of some stripe. Wrapped presents surrounded the tree, except for the space excavated by the train-watcher. After a few hours, what began to seem remarkable about him was the intensity of his devotion to the little train. He stopped it from time to time to add or subtract cars, and tinkered with the station-house. Then suddenly there was a derailment, and the panic was on. He tried to fix it, but was suspected of worsening things, and he was prevailed upon to fetch Uncle Petey, whose train it was. First thing, he ran up to Dave in a cold sweat. “Are you Uncle Petey?” he hollered, and repeated his question to most every male in sight, rocketing around the house. He flew into the kitchen and out the back door, his anxiety increasing by the minute.

“What child is this?” I asked Joe in the spirit of the season. Joe was sitting next to me, and had the most seniority in the family. “I don’t think I’ve ever seen a kid so single-minded. Is he your grandson?”

Joe furrowed his brow. “I don’t think so,” he allowed after a while. “I think,” –here he pointed at a young man hoovering fondue in the dining room–“I think that fellow there, before he made my daughter pregnant–well, they both did that together I guess–I think the kid comes with him. But I’m not sure. Well, it’s complicated,” he wound up. I asked around. Nobody knew who the hell the kid was.

Meanwhile, Uncle Petey had been summoned and was calmly making repairs to the tracks when Colby shot back into the room, his relief as profound as his panic. Everything was back in working order, and the lip was reinstalled on the table. Pete deflected my admiration of the decor to Linda. “She does it all,” he said. “All I have to do is get the boxes out of the attic. And this isn’t half of what she usually does. I left most of my track up there, too.” I don’t know why, but girls rarely show this kind of appreciation for a train set, though many boys carry it well into adulthood. We had bookends of railway fanaticism on display right here; Pete was comfortably into his sixties.

Linda wasn’t sure who Colby belonged to, either. But it was a concern for her, because he was the only kid who didn’t have a gift under the tree. Before long she’d corralled Pete and sent him up to the attic to get the box for the train set. It was spirited out to the shop and wrapped up and topped with a bow. Colby was going to leave with that train.

Finally the time came to pass out the gifts, and Colby was persuaded to the sofa and presented with his package. I told him he had to wait for all the gifts to be distributed to the other kids before he could open his. He gripped it fit to strangle, eyes darting to the train and back to his gift, clearly on the last thread of his abilitiy to hold on. Should he just start ripping? Go back and stick his lip on the table? Pee? What? Three seconds before he was set to detonate, the word came that the kids could open their presents. Ripping ensued. As soon as he saw sections of track behind the cellophane of the box, Colby started shrieking. ‘I KNOWED IT! I KNOWED IT! I KNOWED IT!” he informed citizens several blocks away. There was a momentary look of horror when he saw the box contained only track, but Linda was there to prevent his untimely coronary. “You get the train that’s under the tree,” she explained. “You can take that home!” Colby vaulted over piles of wrapping paper and extracted the train, tracks and station in Olympic time, slotting it all into his box, and then clutched the box to his chest as though he was holding his heart in.

How in the world had he knowed it? It wasn’t even knowable until about a half-hour before he opened it. Now, I’m a happy person. It’s all a matter of not knowing what to expect, but being content with what I get. I think that’s called sanity. But sanity’s got nothing on Santa.