I came home last week and there was a big-ass painting sitting in the living room chair. There had to be a story behind it, because it can’t have gotten there on its own. Turns out Dave had scored it from the artists next door, who had decided to clean out their basement. They’re good artists, and it was a good painting. And it was five bucks! Unfortunately the painting had slouched in its (big-ass) frame. It would need to be taken apart and recombobulated.

That’s where a lot of our good art goes. Dave spends some serious time in the bathroom, much of it quality time, and he likes to look at his gallery.

“No problem,” I said. I have personally framed and matted some fifty or sixty pieces of art in this house. I try to avoid the framing stores. Professional framing is great, but it will drain your beer budget in a hurry. The painting, a pastel portrait, had come unmoored from its mat, and needed to be re-taped. Ordinarily I could put a project like this off for years, but this was (as previously described) a big-ass painting that was likely to get in the way, so I got right on it.

An hour or four later I had liberated the mat and painting and had the big metal frame in parts and the glass carefully stowed against cat intrusions and a precarious pile of screws, clips, and corners in detention on my desk. Pastel is pure pigment in powdered form. The painting, exhilarated at being freed from its prison after twenty years, began shedding pigment with great joy and abandon. Colored motes cartwheeled through the sunbeams. The lighter colors tossed their dusty hats into the air like Mary Tyler Moore.

But there was more going on here than mat, painting, and glass. The mat was glued to foamboard, for some reason. I pried that apart, re-taped the painting, glued it all back together because why the hell not, and went to clean the glass.

Huh. Not glass after all; Plexiglas. Did you know you can’t use Windex on Plexiglas or it clouds up? I didn’t either. Plus, it had big scratches across it.

Huh. Also, the glass doesn’t go on top of the mat after all. There’s a foam bit in the frame that forms a channel for the glass and for the painting and keeps them both an inch apart. I decided to buy real glass. A nice lady named Jessica at Beard’s Frame Shop said she’d cut me one while I waited, so off I went. And she gave me some assembly tips. Evidently you can slide the picture in the bottom part and then you can rest the glass on some beanbags (of course I have beanbags, in the shape of a frog and a salamander–who doesn’t?) and slide the whole top part of the frame over it, easy peezy.

Did you know you can spend $83 on a piece of fucking glass? I didn’t either. Special glass, it was, with some kind of coating on it to protect the painting from UV light. For $83, I want it to repel gamma rays and Fox News. Jessica wrapped my special glass up for me, and I turned for home, expressing some self-doubt.

“Would you like me to do it for you?” Jessica said.

“No,” I told her. “I want to fart around with it for three or four days and then have you do it for me.” Ha ha! I crack myself up. I didn’t mean it, of course. I was home for less than an hour before bringing it back for her to do it for me. 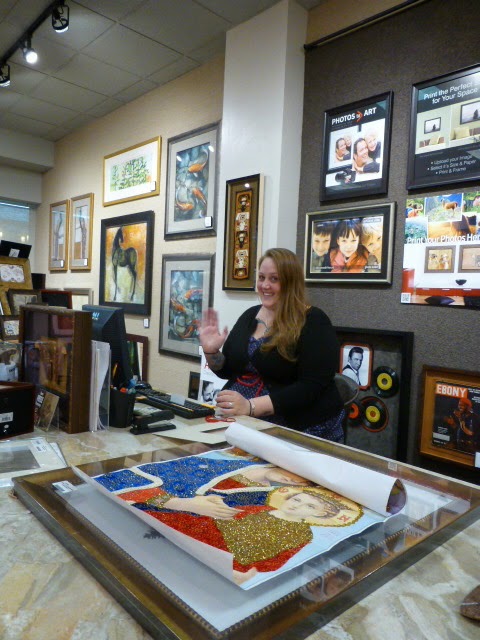 I couldn’t get the glass to line up in the channel. It was too wide to make those micro-adjustments on both sides at once by myself. It was like trying to invade Poland and France at the same time with a single Panzer. I summoned Dave. Dave had just thrown his back out and was consequently in a fabulous mood. Plus, he’s the guy you want lifting the car off you, but not threading your needles. And this was a delicate operation. The glass wasn’t about to slide in that frame unless it responded to naughty language, which, in fact, did not impress it at all. I dismissed Dave, who had already concluded that the glass was the wrong size and also maybe he’d married the wrong person. I said I needed time to think.

I thought real hard, had another go, and snapped off a tiny corner of the $83 glass. I thought some more. I thought that getting the professional framer in on the job would ultimately be cheaper than doing it myself, once I factored in the emergency room bills and the cost of a messy divorce. I brought it back: the glass, the painting, the frame in dozens of pieces, a quorum of screws, clips, and corners, and my credit card, still warm.

“I don’t know,” Jessica said. “This is weird. This is a home-made channel glued into this frame. No wonder you had trouble. I can try to make it work, but I’m not sure.” Mollified, I got out of her way. Then she and her coworker Sarah spanked it all together in ten minutes like it was a grilled cheese sandwich, taped it up in protective cardboard, gave me hanging hook hardware, and hoped I’d have a nice day. No charge. I considered bursting into tears, but opted instead to just bake them some cookies. I don’t have skills, but I do have my dignity.