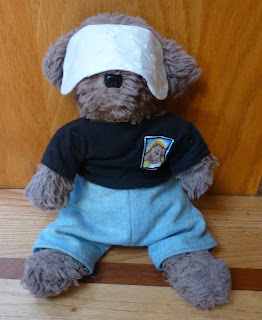 The man they are calling the Maxi-Pad bandit was apprehended quickly. He had robbed an auto parts store in Apple Valley, California whilst wearing a Maxi-Pad over his eyes. If he’d had any experience with the things, he’d never have gone that route. I’m not sure exactly what tipped off the police. Perhaps they put out an APB for a large man in a dark T-shirt who had lost his eyebrows to the adhesive strip.

But anyone familiar with Maxi-Pads would have been able to tell him that no matter how carefully you position the thing, your identity is going to leak out at some point. He might have had better luck if he’d tried the kind with wings, which would have concealed his nose and forehead. But even with an overnight pad, you’re never going to be able to count on complete coverage.

At least he was fortunate enough to begin his spree after the invention of the adhesive strip. If he’d tried to rip off an auto parts store in the ‘Sixties, he’d have been in a world of hurt. No matter how well he tightened the little belt, the sucker was bound to travel. It would slide down his face or up over his forehead but it would not stay where he intended to be. 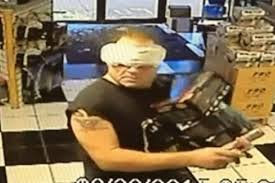 Another thing to consider was once he’d decided to go with the Maxi-Pad, swimming was out for the rest of the day. If he’d had even an ounce of creativity, he might have been able to fashion something along the lines of a sombrero with tampons tied to the brim where the dingleballs are supposed to be. Even if his features were visible through the swinging tampons, most witnesses would be too astonished to recall them. Then all he’d have to do is ditch the hat in the nearest dumpster and he’s home free. But there’s something about this fellow that makes me suspect he’d just go around the corner to the Burger King and sit at a table with his tampon hat on and admire his auto parts. And somebody would notice.

Wait! Panty liners! Dude totally could have gone with panty liners. He’d appreciate the slim contour, comfort and lack of bulkiness. He could cover his whole face with a half dozen and still have some left over for the tattoos on his arms, which were by the way visible in the surveillance video.

Instead it looks like he’s going to jail. He should have used StayFree.