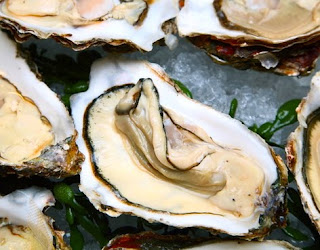 One wonders how some foods were discovered. Who was the first to defy the conventional wisdom that tomatoes were poisonous and say, “Death be damned, it just isn’t pizza without it?” What lovesick sailor slapped a tongue on the first oyster? Whoever had the gumption to saw into the first chicken-fried steak? Well, two out of three ain’t bad.

We have a pretty good idea how the first batch of Kopi luwak, or Civet Coffee, came about, however. Civet coffee is made from coffee beans that have passed through the digestive tract of a small mammal called the Asian Palm Civet. All the way through. The civet naturally prefers the very finest, sweetest beans at the very pinnacle of ripeness. Coffee bean farmers, who maintain a dicey profit margin as it is, naturally detest the civet. After attempts to interest the public in Fried-Civet-On-A-Stick fell flat, someone noticed that the coffee beans survived the trip through the mammals virtually intact, and thought: hmm. Let’s brew some of this up and serve it to some obnoxious rich guy down at the hotel. 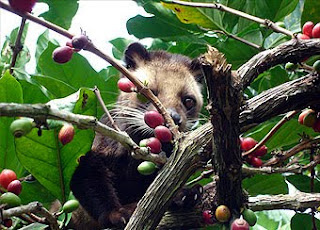 It was a hit. The coffee was proclaimed the richest and most flavorful in the world, “almost syrupy, thick, with a hint of chocolate.” Some elements of the civets’ digestive systems removed the bitterness from the beans and kicked in that certain something extra, which was not chocolate. “How are we going to sell this crap?” wondered the plantation owners, trailing a stick through clumps of civet poop, but that, of course, is the time-honored job of Marketing. And people were inclined to pay through the nose for the coffee. Good thing, too, because the gathering of fecally enhanced beans is very labor-intensive, as is the preparation of the beans (described as including a very, very, very thorough washing). Civet coffee sells for upwards of $99 a cup in London. Before you can say “Chock Full O’ Doots,” a new market was born.
Initially, only a few of the smaller coffee farmers collected the clumps of fecal matter, considering it their civet doody. Retrieval of the poop is a time-consuming process in the wild, where, according to Wikipedia, “a civet would defecate as a means to mark its territory.” [Scientific aside: this is not the primary reason the civet defecates. And if the civet is fastidious enough to poop outside his living room, he is not necessarily “marking his territory,” although I suppose it comes down to the same thing.] Eventually, farmers took to keeping civets on a short leash, and doot collection was simplified. 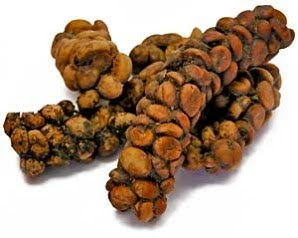 I do not know whether the coffee is as delightful as it is made out to be. I do know that there is a certain set of humans who are willing to pay $500 for something they wouldn’t drop five bucks on. Somewhere in Asia today some man is forking over suitcases of cash for a vial of powdered tiger penis to get the same effect he could have gotten with a two-dollar porn video.
Fast on the heels of the genuine civet poop coffee market’s success comes the effort to produce imitation civet poop coffee. “True civet-poop taste without the civet,” says Marketing, and indeed there has been some success in replicating the civet’s digestive enzyme complement and treating beans with it. The demand is expected to grow due to the dwindling of the civet population, brought about because most of the larger coffee producers would still rather kill civets than scoop poop. A lab in Vietnam got the jump on its competitors in producing simulated civet coffee during the Great Civet Constipation Epidemic of ’98. Their efforts were the primary engine behind the proliferation of Grunt ‘N’ Grind franchises all over southeast Asia. Real or imitation, however, civet coffee is good to the last dropping.
By Murr Brewster|2021-11-09T21:27:21-08:00July 24, 2010|Uncategorized|33 Comments