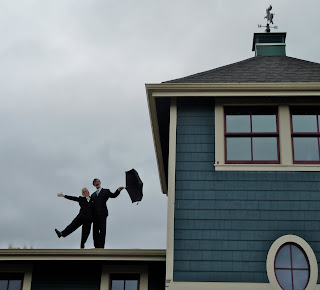 A terrific windstorm came up suddenly last summer, turning a calm blue day into a raging dark in a matter of seconds. We love storms like that, and hurried up to the tower to get a little closer to the action. “This is great,” I told Dave, “and what makes it even better is I’m no longer a mail carrier. I used to hate having to walk up there at Main Street and King in a wind like this; I always thought I’d get flattened by an elm tree.” Fifteen seconds later the phone rang. 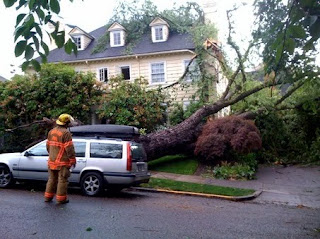 It was Carl. He was calling from my old route. “You should see it, Murr,” he said excitedly. “One of the big elms on Main and King just came down.” We laughed and chatted and he continued to give me a blow-down by blow-down description. Now, was this an extraordinary and meaningful coincidence? Evidence of my powers of prophecy? Hardly. Those elms were destined to come down in a big wind. We were having a big wind. Down they came.
People are wired to maneuver through a sea of happenstance, trolling for connections, snagging events almost at random and examining them for significance. We draw lines in the stars and yank them towards us, until the universe becomes more cozy, more hospitable–anything but indifferent.
Some famous person dies and a few days later another one dies, because that’s what we all do, and invariably someone will point out that “they always come in threes.” Eventually someone else dies, the ghostly trio is wrapped up all tidy, and everyone quits counting until the next one, when it starts over. 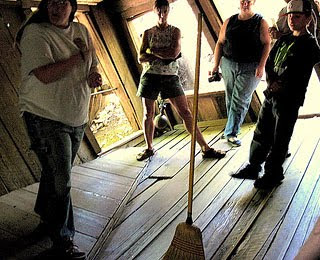 A woman of our acquaintance with way more than the usual smarts surprised us one day by relating her visit to a roadside attraction. “It’s called the Oregon Vortex,” she said. “It’s this weird place on the earth where the rules of gravity don’t apply, water runs uphill, and you actually grow or shrink depending on where you’re standing. Brooms stand on end. Pendulums hang crooked. It’s amazing.” We grinned in unison, and then, after a few beats, we realized she was serious. 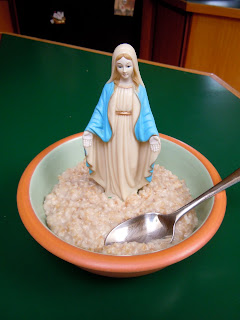 “Jeez, honey, that’s not real. They use optical illusions.”
Our friend was undeterred. “No, really, it’s a spherical force field of magnetic disturbances. The Native Americans won’t go near it. Birds won’t even nest there.” Well, poo. Our nearest Native Americans, who live only a block away, have never dropped by, and birds won’t nest in our yard, but you don’t see me charging eight bucks a pop to get in. I kept going. “I saw the same thing back when I was growing up back east–Mystery Hole,” I said. “I remember making Daddy pull over.”
“Well, it is real,” she insisted. “There may be more than one place like that on earth. They might have some sort of connection,” she went on.
Dave piped up. “Yeah–Route 66,” he said. (It has already been pointed out that Dave and I are no fun.) 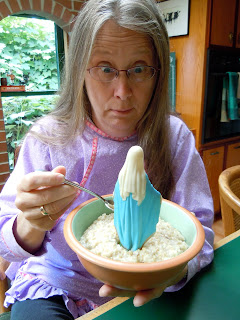 The fact is, humans are naturally credulous critters. That’s why so many people see the Virgin Mary in a bowl of oatmeal. If you’re looking for the Virgin Mary, you could probably find her in one out of every ten bowls of oatmeal, given the right light source. There she’ll be, but it doesn’t seem like much to build a shrine around.
Dave and I run up to the roof whenever there is a thunderstorm. We love a good thunderstorm, and we go to the highest point in the neighborhood, just under our metal pig weathervane, to love it more thoroughly. It’s not recommended. So if we get sliced out of the gene pool, don’t read anything into it. It don’t mean a thing. It’s just natch’l.
By Murr Brewster|2021-11-09T21:27:15-08:00July 31, 2010|Uncategorized|24 Comments