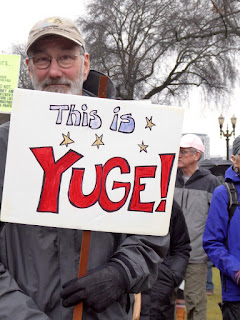 Friday morning, January 20th, 2017, before dawn, millions of us woke up to a now-familiar bolt of dread, the sleep-stealing quicksand of despair, the certainty that all is lost. That everything we cared about, from our fragile democracy to our tortured planet, was to be sold for parts, or discarded. That the train of progress that had, before, seemed so inadequate and slow had been yanked off the track altogether, had pitched into the ravine.

But on Saturday there was a climate change.

On Saturday there were enough of us to hold up the sky. 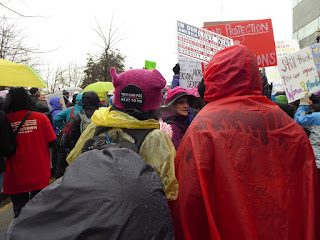 We could feel ourselves rising. It’s a five-mile walk downtown to get to the Women’s March and everywhere on every block people were headed the same way, smiling at each other in recognition, daring to hope. Families gathered at bus stops. Busses arrived already packed. By the time we reached the river, the bridges blossomed with pink hats. We pressed into the crowd and cheered and chanted and sang for an hour in the dumping rain before the march began. Soaked, and sunlit from within. 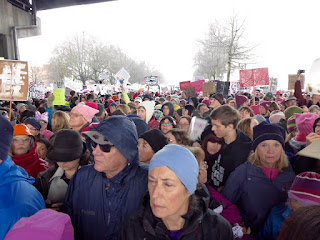 One-sixth of the population of Portland was there. The entire march route had been filled, so it was slow going. It was wet. Buoyant. Peaceful. Majestic.

There were counter-protesters. Three, by my tally, standing on the traffic median with signs (“Not All Women Are Haters”), politely ignored by the loving masses flowing around them on all sides. They looked damp and dispirited, stranded in a dinghy on the ocean. 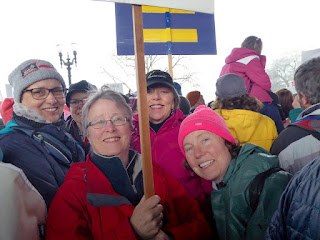 A crowd like this? It’s all hairlines and hat brims from my angle. When you are a small person, you have no idea how big a march you’re in. It’s like trying to figure out where your home planet is in the Milky Way, just by gazing. Are you at the margins? In the middle? Toward the beginning, or the end?  Could this gentle gathering of humanity stretch the length of the waterfront? Across the bridges? The state? From sea to shining sea? If we all held hands, would our grip redound across the world?

Standing there, rocking a little side to side for warmth, in fearless contact with unknown thousands, we know we are all facing the same direction. We are corpuscles surging in a stream. We are the lifeblood of democracy.

So thank you, Mr. President. We’re all awake now.