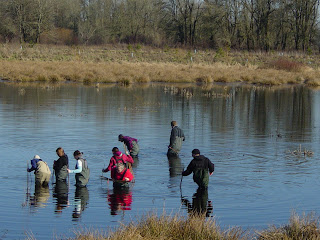 The discovery of a body in a marsh just north of here has turned the red-legged-frog-egg-mass-monitoring world upside-down, as you might well expect. Amphibian monitors were indeed credited with the grisly find, and now monitors throughout the greater metropolitan area are quaking in their chest waders. It is all too easy to imagine the scenario. 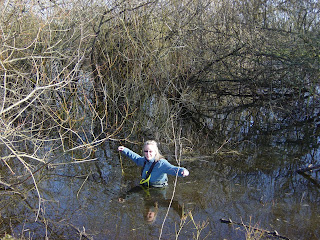 Dave and I did our first amphibian-egg-mass survey of the year last week. He holds the bamboo stakes and flags and I carry the clipboard and data forms. We insert ourselves into a cold swamp up to just below (ideally) the top of our waders and hunt for frog and salamander eggs. If Dave spots a clump, I stop the stopwatch and ask for details. These include the stage of the eggs, their depth in the water, and what they’re attached to, if anything.

“Attachment: grass, wood, or none?”

Dave would peer into the water and back away. “Ring finger,” he’d intone, while the background chorus of frog bleats is suddenly echoed by banjos, and slowly, slowly, a rising form would break the surface of the water and–but no, no, it’s too ghastly to contemplate. What if his eyes were open? What if he were purple or otherwise unsightly? What if he were someone we had recently disparaged in a public place? Would the fact that our car does not have a trunk be considered exculpatory? 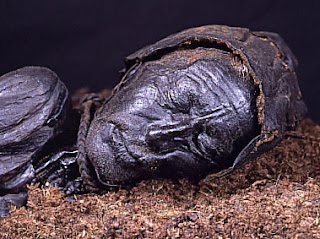 At least we do not work in peat bogs. Peat bogs in the British Isles have been producing remarkably uncorrupted cadavers for years. They barely deteriorate over the millennia in the anaerobic peat environment. Anyone unearthing one of these is likely to cause the local police department to scour their records for missing persons last seen wearing 2,000-year-old tunics. 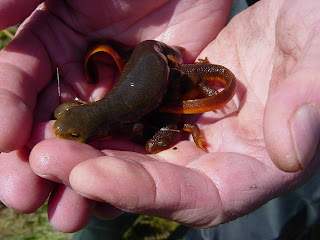 No, our swamps are seasonal ponds, wet in the springtime and summer-lush. The regional government Metro sends us to tromp through them every February to search for evidence of frog and salamander romance, considered a reliable metric of goodness in the world. It can be risky, especially for Brewsters, who are congenitally tippy. My niece Elizabeth abandoned the effort after our first season due to her inherent inability to keep the swamp on the outside of her waders. She was replaced by my husband Dave, who is dependably sturdy when sober and also wears much higher waders. Still, rampaging nutrias and irritable herons are a constant threat. Deep down, the amphibian monitors’ greatest fear is that the body in the marsh is one of us, from a prior year. After we inventory the amphibian eggs, does Metro inventory us?

If there’s no blog post here next Saturday, please give them a call.