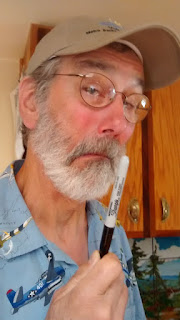 I didn’t like the looks of a spot on my forearm, so I photographed it and sent it to my dermatologist. He indeed said he would like to take a look at that, and I should get an appointment. I did. A month and a half out. Well, I’m used to that with Kaiser. I like them a lot but if you want to see a dermatologist or a gynecologist you might be waiting a while. You might have to wait if–as my friend Noah put it–you have a vagina, or skin.

I have both. Neither is in original condition.

I’m assuming my spot is not all that dire or they would have found a way to slide me in earlier. And I’m not particularly worried about it. It’s suspicious, but I have this idea, true or no, that no one dies of forearm cancer. Dying of forearm cancer would be weird. Not as weird as that sports photographer who wanted to get the cool inside shot at the dog track and got his head lopped off by the mechanical bunny–that was really weird. Or the fellow buried alive after standing on a stepladder to administer an abruptly effective enema to an elephant. Also weird.

But as long as I have an appointment anyway, I’m going to give him a tour of the neighborhood. He’s never been enthusiastic. Maybe he feels short of time. He never wants to see anything but the dot I came in with, and that just bugs me. There’s at least half of me I can’t even see. I’m only in there every couple years. Why can’t he get a bright light and have a look around? It couldn’t take that long. I’m only 5’3″. I don’t care if he has to hold a dainty hankie to his nose, as long as he does it.

Even if I could see it all, I wouldn’t necessarily know what I’m looking at. When I met Dave, I discovered he had a set of the most baroque and alarming moles on his back, any one of which looked poised to take him down, but he never did anything about them, and they’re still there, only forty years older. What do I know? 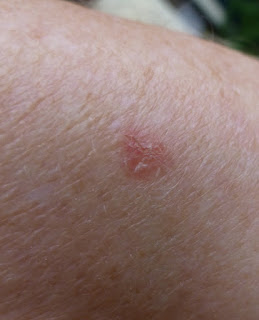 I also plan to point out my tick bite. You know, the tick bite I got in March. Still there. That sucker has stamina. I suspect maybe the little bastard left some spare mouth parts in there, and I hope-to-shout he never gets his mouth properly assembled again. Or perhaps the lump is some kind of egg sac, and one night when I least expect it, it’s going to rupture and aliens are going to pour out of it like Huns over the steppes of Asia. It does have a sinister Vesuvius look about it. I had a nurse friend look at it, and she wasn’t impressed. Well, she’s a midwife, actually, but that’s the same thing, and she’s had to wrap her head around, and in some cases jam her arm all the way up, way worse things than this.

I guess if the good dermatologist is that pressed for time, I can get Dave to flip me over and circle anything suspicious with a Sharpie before I go in. But I don’t want to. Three minutes in, he won’t be able to stop himself from connecting the dots. This I know.