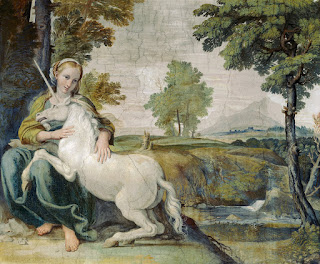 So Dave came home from a walk the other day and I asked him what-all he’d seen and he said Nothing, and then he thought about it for a moment and said Oh yeah I saw a unicorn, and I said Where, and he said Over on Edgehill Place, and then we talked about dinner. But later I circled back to it because it seemed odd to me that if he were to see a legitimate mythical beast it would be a unicorn. Neither of us has the kind of affection for unicorns that most people have. Seems to me if you’re going to string together a lot of odd features into one critter, you could do better than a horse that can spindle you with his head. Not that you hear a lot about unicorn spindlings in the news. Perhaps they’re bred to be unaggressive. If they’re doing anything at all, historically, they’re sitting on the ground with their heads in a pretty girl’s lap. That comes from the notion that only a young virgin can tame a unicorn, wink wink, like we don’t know what that’s about. 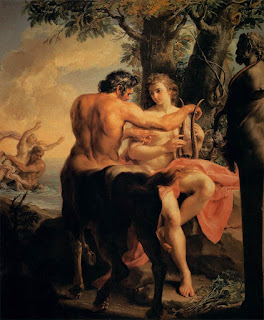 If I’d had a thing for such beasts when I was a young wink-wink, it probably would’ve been a centaur. Flying horses looked nice but I was afraid of heights and didn’t even fly in my dreams. The centaur is designed to be appealing. Unlike the mermaid, which is all come-hither on the top end and sorry-Charlie on the bottom end, the centaur promises all the parts, and in a big way. We can see how all this came about. Men were in charge of writing this stuff up, and when they visualized their handsome top halves, they made sure to include impressive equipment on the bottom half. But when they visualized half of a beautiful woman, they made sure to make her endlessly frustrating, just like women are in real life, so they can go crazy and feel comfortable and justified about killing things. 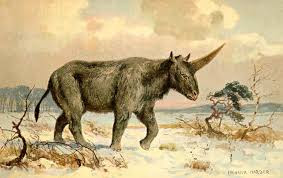 But why a spiral horn? Why not a horse with tusks, or plates down its back, or long graceful fingers? Well, there were probably a number of extant critters that could qualify as a unicorn, at least in description. They’ve been cited going back many thousands of years. In fact there used to be a large mammal called an Elasmotherium that ran like a horse and had a single giant horn on its head, and although it lacked delicacy, we’ve had thousands of years since we made it go extinct to shine up its reputation. Earlier ones had elephant feet, and maybe a boar’s tail, and it took hundreds of years of playing “telephone” across Europe to recombobulate it from a rhinoceros to a virgin-friendly equid. 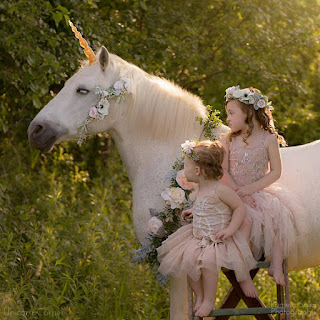 And the spiral horn of a narwhal is what was generally presented as a unicorn horn. Back in the day, it was common for people to take found bones and odd, unrelated parts and assemble them into all sorts of things that never existed, the same way Republicans cherrypick data, email, and random lies to make the case that climate change is a hoax. People bought into it then, too.

Dave reports his unicorn was not two men in pajamas and a papier-mache head. It was quite authentic right down to the hooves and sparkles, and was being led down the street by one or several princesses to reintroduce it to its native habitat, a child’s birthday party. This is what happens when real estate prices go through the roof.

I’m glad for him that he saw it, and now I’m looking around for my centaur. Just my luck he’ll turn up with a pot belly and a T-shirt that reads “If you can read this, the bitch fell off” on the back.