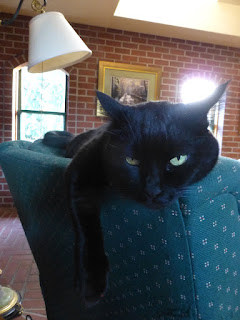 There are three authorized house mammals here, and only one of them wants my recliner to go away. It’s not me or my cat. My recliner is, I am told, disreputable and embarrassing. That’s sort of harsh, considering it’s only about 34 years old and still works just fine. It’s arguably a little worn, but who isn’t? You don’t abandon things because they’re old. You don’t just give them the heave-ho. Even the President won’t get impeached merely for being massively ugly. The chair works just fine.

People of a certain fancy sensibility find it unattractive. It looks like it belongs in a mobile home four feet from a TV playing a Golden Girls marathon, and that was fifteen years ago. Now it looks like it got relegated to the front deck made of pallets under an awning of corrugated plastic. Our first cat (Saint) Larry loved this chair to ribbons. Our current cat Tater figured she’d finish the job. There is some double-sided tape that was pressed onto the fabric about 25 years ago to annoy the cat, but it’s no longer sticky on the cat-side, due to the accumulation of mystery lint. It’s plenty sticky on the chair side and I can’t peel it off. Larry preferred to love the front end and Tater has picked up the slack on the back, sides, and top. There’s wood poking out of the top corners. The top is particularly cushy and wide and she likes to drape herself on it. This is why we call her the Chair Leopard. 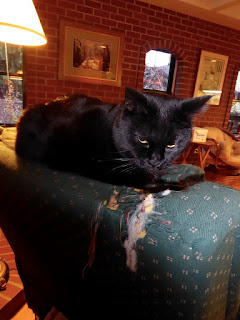 So there is also a stratum of cat fur in all the creases and the top. It resembles felt due to the binding effect of the millions of dead skin cells I have contributed. You lose 500 million skin cells a day, or eight billion trillion, depending on whether you believe the Mayo Clinic or the mattress industry. The skin cells are, however, already dead of natural causes, although there should be a small concentrated paste of thigh cells somewhere that were murdered on the spot the day Tater was on my lap and a German Shepherd walked in unannounced. 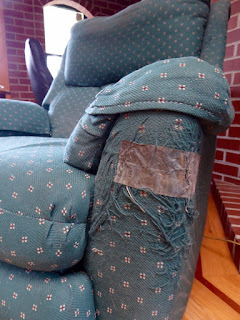 Additionally there is a sedimentary layer of crumbs and food items which bounced freely off my chest for the first twenty years or rolled straight down without impediment for the last ten. This chair has been with me through thick and not-quite-so-thick. It would be a treasure trove for archaeologists of the future. The actual living shape of the occupant couldn’t be clearer if she were abruptly buried in soft sand and fossilized. Details of diet and clothing will be readily discernible. It’s possible an antique flu virus could be reconstructed from the drool zone. Two extinct cats could be cloned and set up in an island park for Jeff Goldblum to admire himself next to. He’ll still be around, he’s always turning up somewhere.

You get rid of an item with this much legacy in it, you might just as well go tromp all over those pterodactyl eggs they found in China, is what I’m saying.

It doesn’t bother me to sit around in a pan of skin cells that I was done with. They’re not useless; they’re feeding an army of dust mites. All told, there are a lot of us who count on this particular recliner. Billions. Anytime I know I am vastly outnumbered I like to sit quietly and blend in, and this chair is the perfect place to do it. There doesn’t seem to be any call for getting a new one as long as I continue to have a cat and we both continue to be deciduous.

Besides, Archie Bunker and Frasier’s Dad don’t have to get rid of their chairs. Is this a gender thing? If I make a stink can I get someone fired?

Do I trade in the chair just because it has a patina and has been exfoliated and one person is scandalized by it? Assuming I love him? Yeah. Shit. I guess so. Goodbye, old friend.

The chair, not the person.