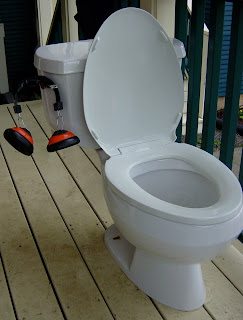 It was three in the morning, right on schedule for these sorts of things, when Dave noticed a cascade of water coming out of the light fixture in the ceiling. He is a sharp fellow and deduced almost at once that something was amiss. Naturally, it was coming from the Devil Toilet. He turned off the water supply and tried to get back to sleep while contemplating a day spent plumbing. You’d have to pluck your nostril hairs at a leaf-blower concert to achieve a similar sedative effect.

It is a testament to Dave that he will always tackle a plumbing emergency even though nothing in this world makes him more wretched. And he’s perfectly generous about spreading his wretchedness around to anyone within swearing distance. Every incident provokes a dozen trips to the hardware store and one to the whiskey store. I used to tie notes to the dog whenever I needed to tell Dave something was leaking.
The Devil Toilet has been a pain under the ass ever since it was installed. It’s in the guest bathroom, and we never asked much of it. It just needed to be white and inexpensive, and when a super low-flow model was presented to us, we said fine. When you push the flush handle, it pins your ears back and blasts you right out of the room. It sounds like the space shuttle taking off. There isn’t even any water in the tank. The tank just has a large rubber mystery bulb in it filled, apparently, with jet fuel. You most certainly do not want to be seated on the thing while you flush. The vacuum will suck in your entire fanny, making the toilet seat look herniated from underneath, and you’ll have to belch repeatedly just to break the seal. If you are a guest attempting to sneak a midnight potty break, rest assured that everyone on the whole block knows what you’ve done. And that’s if it actually works. The first two or three times you try it, it just makes hairball noises. Any one of these dreadful traits could be gotten used to, for a permanent resident. But it is the worst possible plumbing fixture for a guest bathroom. 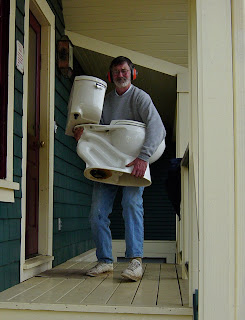 So I was thrilled when Dave assessed the situation and declared that the toilet itself needed to be replaced. “Are you going to go buy a new one today?” I asked. “Nope,” he said. “I think I’ll just use the one in the basement.”
This is an amazing thing. We can’t ever find a pencil or a pen or a roll of tape in this house, but here we had an extra toilet just handy by. Not plumbed, mind you. It’s just a toilet in the basement, stashed away where a passing drunk won’t mistake it for a working item. We picked it up from an office on my mail route, where it was being replaced by a super low-flow one. (Heh.) Just in case we ever needed one.
The Devil Toilet and everything else that went in our house addition was professionally installed by Rob the Plumber. We love Rob. He’s an enormous man, in every direction. He’s about five thousand pounds, and he’s not even fat. All right, he is, but not as fat as you might expect. When we first met him we were much relieved to find him wearing overalls. I’d pop in on him from time to time, checking on progress, until one day he was crouched next to the bathtub wearing sweatpants with the elastic in a state of complete surrender. There’s a record of that moment on my retinas to this day. The Colorado River never carved out anything bigger. In retrospect, I believe it was a deliberate customer repulsion tactic. Nobody really likes supervision. 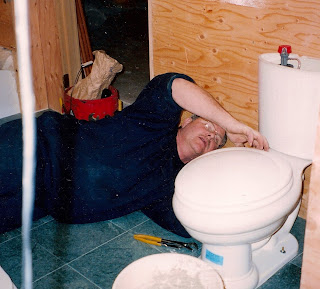 Dave got the basement toilet installed in the guest bath with a minimum of agitation. In a hopeful portent of plumbing to come, it fit against the wall without a micron to spare. I did ask–as delicately as if I were chucking a grizzly under the chin–if I could help in any way, and whereas in a normal household one might be asked to fetch a wrench, or mop up a mess, my specific instructions were to hold off pooping so I could “have one ready in the chamber to inaugurate the new toilet.”
So I held off. The urge went away and hasn’t come back yet. I’m full of anticipation. I think it’s anticipation.
By Murr Brewster|2021-11-09T21:29:43-08:00April 3, 2010|Uncategorized|37 Comments