Do You Know Where Your Weasel Is? 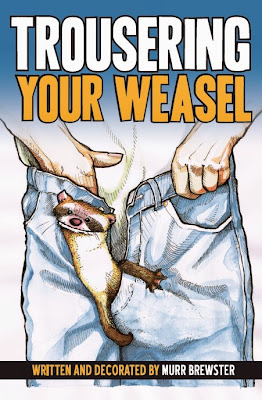 Here’s something you don’t know about my book Trousering Your Weasel. It’s a great gift book. I know this because people no sooner get their hands on a copy than they’re trying to give it away. What I’m thinking is that it’s something you want to keep a nice stack of on hand, to use as hostess gifts. Sure, wine is more customary, if you want to go the humdrum route. But it’s been done. Picture instead arriving at the nice dinner party and exchanging air kisses and then pulling out Trousering with a flourish and saying “I thought you’d like to have this. It’s for the toilet tank.” And your hostess will be numb with gratitude. She might not even be able to express it.

You’ll have to explain right away that if she is expecting to learn how to trouser a weasel, she will be disappointed. Nowhere in the book is that explained, but the information is out there for anyone inclined to hit a search bar for “ferret-legging.” This is an endurance sport that originated among Yorkshire coal miners whose prospects for a fulfilling life were already bleak. According to the world’s champion ferret-legger, clocking in at five-plus ferreted pants-hours, the trick is to wear baggy trousers and cinch them off at the ankles. At that point all that is required is to hoist up the ferret and pour it into the top end of the trousers, and then belt up. There’s no way out for the ferret, but the ferret does not know that, and will begin to search up one side and down the other, and if there’s anything to swing on, he’s liable to swing. Many parts of the ferret are sharp, and all of it is skittery. The experience can be transformative, because it forces the ferret-legger to live in the present. It’s sort of a shortcut to enlightenment.

Trousering Your Weasel is not enlightening at all, unless you didn’t already know that wombats’ poop is square, but it looks really good on a toilet tank, and whatever is currently on your toilet tank has probably gotten dimpled and speckly. The practice of reading whilst on the toilet is one that seems to cleave down gender lines. Most women do not read on the toilet, and most men will risk their underpants looking around for something to read before they go in. Dave has never understood why I don’t bring the newspaper into the bathroom with me, and the answer is simple: I go in to the toilet shortly before I am going to take a dump and leave directly afterward. I am goal-oriented and in tune with my colon. Men, however, go into the bathroom when they think it is reasonably likely they will take a dump sometime over the next few hours, so that they are not caught by surprise. They are inattentive creatures by nature, but boy-scout prepared. If something should emerge in that time, they might yet remain on the toilet until they’re done reading. I wonder that they don’t find themselves crusting over more. Anyway, the gracious hostess will have provided reading material handy-by. If I were to go into someone’s house and find a copy of Trousering Your Weasel in the toilet, I would consider it a classy joint. A book of matches is a nice touch, too.

The title refers to an incident in the very first essay, about a man caught trying to smuggle a ferret out of a pet store in his pants. This is a true story, of course; every time you turn around, there will be a new story about someone who has attempted to smuggle some sort of beast–snakes, monkeys–over the border or onto an airplane or what-have-you. And that’s just the ones who get caught. It’s probably just scratching the surface, as it were, of the total population of trousered fauna. The rest get away with it by taking advantage of the public’s natural disposition to look away from a man with especially lively pants. And you can just about guarantee that, like the toilet reading thing, it’s going to be a man. Women will bury strings inside their own butt cracks to avoid visible lines. Even a small rodent would be simply out of the question.

Anyway, I thought I’d bring up the gift-book idea purely out of selfless concern for others. If I can solve that vexing hostess-gift conundrum* for a few people, I will have considered my time on earth well spent. And I do want to point out that if you wanted to go to my book page and order a slab of books directly from me, and not amazon.com–that is the kinder way, from the author’s standpoint–you can not only get them signed, but shipping is free for orders of three or more books. You’re welcome.

*It probably works for Christmas, too.