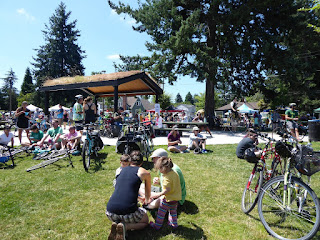 Sometimes, on good days, Portland reminds me of Dresden, without all the bombed-outness. We visited a friend in Dresden some years ago, and even though significant portions of the city were war-damaged or soiled or missing altogether, there was still a sense that people had their priorities straight. You could tell right off that they were doing something right because they were energetic and healthy while carrying a beer in one hand and an ice cream cone in the other. No one seemed either particularly prosperous or destitute. Our friend didn’t have much money but neither did anyone else. There’s a level of contentment to be had in modest means, shared. The roads were filled with pedestrians, or people walking their bicycles, which doubled as baby strollers. The middle of any street was packed with people, and behind them would be a humbled automobile with its gearshift set on “plod.” One didn’t get the sense that the driver was at all impatient, either. He understood where he belonged in the processional. The celebrants were all ahead of him and he just carried the train.

This is as it should be, people. 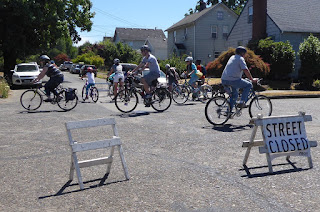 As the masses milled about the ancient city, its stone buildings stained by a few hundred years of coal, with bright flounces of graffiti at their hems, I felt I was looking at the past and the future at the same time. This poorer nation was demonstrating our future–if we do it right.

Portland is groaning under new wealth but still taking deliberate aim at a sensible future. Meet Sunday Parkways. Periodically, on summer Sundays, the city closes off a goodly loop of streets to auto traffic and the neighborhood blooms with bicyclists, enjoying life in a civilized setting. It’s not at all enjoyable for people in cars trying to get somewhere in the vicinity, of course. But shoot: car-driving makes people crabby anyway. That’s a known fact. 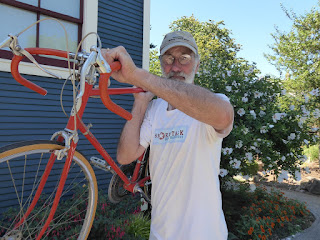 Our local loop was eight miles, give or take, and included three major parks, with musicians and entertainers in them, along with food booths and free stuff. I’ve been in many mass-bicycle events but this one was different; we poked along, coasting behind little boys on scooters, and tandems with freeloading toddlers, and life in general slowed down so much it was strokeable. Portland Opera was set up at the first park and we discovered that, whatever else we’d planned to do that day, we had plenty of time to sit in the grass and listen to a dozen arias. 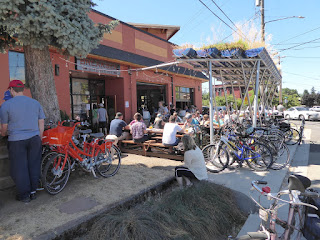 The entire first half of the loop was downhill with a sturdy tailwind, so I was bracing for the return trip, but in FutureLand it’s downhill both ways. So many neighbors had claimed the peaceful streets that it seemed impossible we wouldn’t run into someone we knew. Dave ran into someone he didn’t know, but neither of them got too badly banged up. His bike is fine too. You can’t really mess up a 1965 orange Schwinn Varsity. That vintage hunk of lead is now a certified classic and earned many compliments from those not called upon to operate it.

I looked around at the liberated streets and the smiles of the children and I said, fuck it: I’m leaving my helmet at home. I never wore one till I was 35 or so and I’ve hated it ever since. I suppose I should have been a good influence on the children, but then I realized that now is as good a time as any for our young people to recognize I’m not their best role model. 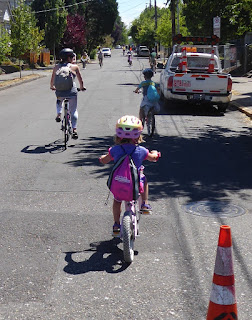 Hiphop at Alberta Park, blues at Woodlawn; gentle breezes turned with us and remained at our backs; miracles abounded; and then we rode right past a particularly fine brewpub. Ha ha! Of course we didn’t. If you don’t sit on a bioswale with your bike against a tree on a Sunday Parkway enjoying a pint of Breakside IPA, you’re not doing it right.

You get a city like this on purpose. You combobulate neighborhoods where almost anything you need or want is a walk or a bike-ride away, and then–well, that little girl with the butterfly wings and the pink helmet and training wheels? That’s all the faster you need to go.

Now to shut down some of those streets for good.