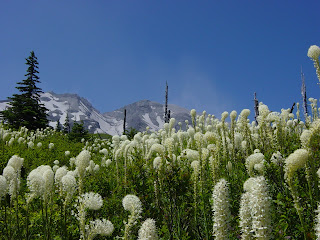 Just came back from a gorgeous and nearly deserted hike on the Loowit, the timberline trail around Mt. St. Helens. There are signs on the trail suggesting what to do if things start to rumble and pop, with specific instructions for avoiding flying boulders and a suffocating ash plume. I’m thinking that, for me, the first step would be to bend over, but I took note of their suggestions anyway.

Even without a lot of elevation gain, it’s a workout. The terrain is unstable and requires a lot of clambering over boulders.

But there was an ocean of bear grass blooming, the most I’ve ever seen in one place. An individual bloom of bear grass is utterly compelling to most men, and a sea of it is grinworthy for anybody. Stea 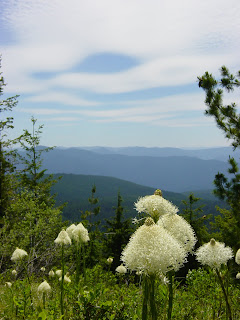 m from the lava dome curled up suggestively in the background. Three young men heading our way, one wearing a hard-hat, reported that the washouts were a little “tricky” but there were marmots near our destination for the day. I adore marmots. I love their chosen alpine landscape, their neat little underground cupboards and their aspiration to fatness. Everything.

The trail sign and all the guides warned us about washouts, too, but the word itself just doesn’t carry much of a threat with it. One almost imagines that the scenery has merely faded a little. We crossed a few washed-out gullies with a little whoopsie-slide here and a boulder-hop there, seeking out small cairns and flags that previous hikers had placed to redirect us to the trail as it continued on the other side.

Then we came up to the crest of a major ravine which had been scoured out by winter floods. The slope was about eighty degrees of loose pumice and sharp pointy rocks with no particular resistance to gravity. The trail as we had come to know and love it was nowhere to be seen, but we could make out a narrow traverse in the pumice that was entirely adequate for voles, assuming they went single file. I was in the lead and started down. I may have made it halfway, secure only in the knowledge that other people had already negotiated this trail, including our friends from earlier, when we saw a couple with large backpacks coming our way from the bottom of the ravine. They waited there because we were definitely in a no-passing zone. We hollered greetings. They said it was worse going up the other side. I froze on the slope while we discussed whether to go on to Marmotville. Mother Nature had gone to some trouble to create this here moonscape, and the ravine, from an aesthetic standpoint, was lacking only a crumpled-up, dented and abraded middle-aged woman at the bottom to really shine.

“It’s up to you,” Elizabeth and Dave agreed, and I wavered for a bit, considering my options. There were three. I could pick my way slowly and laboriously to the bottom of the canyon. Or I could arrive at the bottom in a few seconds. Or I could hike back the six miles we’d already come, drive back to Portland, drive all the way back another day and start at the next spur trail over, hike in another six miles and backtrack to what would be the other side of this canyon and I’d be right there in Marmotville. This seemed much the easiest plan. “I think I want to turn back,” I admitted in a wretched tone of voice. Elizabeth and Dave were probably plenty relieved I’d decided to turn around, and, as a bonus, would have me to blame for our lack of fortitude. Unfortunately, the distance I’d already traveled in the washout, just on faith and a dab of momentum, was entirely daunting now that I’d had a few minutes to work up a froth of adrenaline. I just about couldn’t bring myself to make it back. I froze at every crumbling, sliding, boulder- and bowel-loo 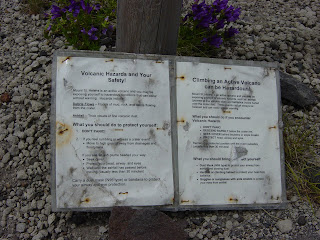 sening step. And now, of course, we had witnesses. Once I got back on relatively solid ground, it was everything I could do not to turn back and yell out to our friends at the bottom of the ravine: “I’M FIFTY-FIVE!” That would have given the wrong impression, though. I’m not decrepit or fragile. I’m just a huge wiener.