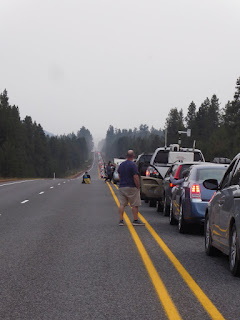 
So let’s review. Oregon is largely on fire. There are four of us in the car. All vital personal equipment including bladders are all well over 60 years old. We’re out of sandwiches; we are three baggies of provisions to the good (pistachios, M&Ms, cherries); and we are currently parked on a four-lane highway in dimming light. The little shithead that lives in Linda’s phone now suggests we are going to arrive at our destination at 7:30pm, but has developed a smirking tone when she is permitted to speak. We have traveled almost ninety miles in six and a half hours and zero miles in the last thirty minutes. Dinner options, according to Yelp, include an establishment renowned for its chicken-fried steak that is either two miles or three hours away, depending. The pistachios look good.

I was still puzzled by this exodus to the south, until the brake lights illuminated a sea of California plates. In a flat tone, Linda updated our ETA to 9:24. Ignitions turned off. Ahead and behind, men extracted themselves from their cars and walked to either side of the road, where they turned their backs to traffic and stood quietly with head bowed and hands folded in front of themselves, probably praying. A half hour later women went to pray a little deeper into the woods. I remained in the driver’s seat, alert to any opportunity to half-inch ahead, and monitored the condition of the sciatic nerve in my right buttock. It was not ideal. Perhaps, I thought hopefully, a medic could do a root canal on it and pack it with ground glass for a little relief. 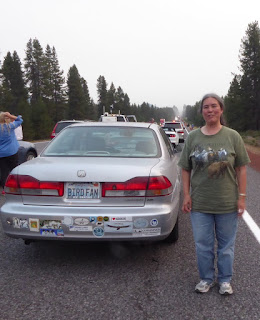 All around us, people meandered around and between cars, exchanging pleasantries. Two sylph-like sisters strolled the shoulder singing an angelic duet. The car in front of us had a nice dog and a promising cooler. Biff and Skippy were a hoot. No one’s navigation app had any helpful advice, but Moonchild was going to get back to us after she studied her eclipse-day star chart. That bird lady? There was no getting her down. I took down Hank’s address for my Christmas card list. The Hankster!

The hills to fore and starboard were ominously filling up with what appeared to be smoke. I turned to Linda. “What does the little shitty person in your phone say now?” I queried, possibly with an edge.

She glanced at her phone, snapped it off, and turned to the window with a look like a mother whose child has been caught pooping in the city pool.

Hours later, we approached Chemult, which I had thought we had passed already. And hours after that, we finally reached our turnoff highway in dead dark. I pasted my attention to a fuzzy white line, dropped the accelerator to the floor, and rocketed to our destination (or, as my vintage eyeballs would have it, hurtled into the void).