Drowning Our Troubles At The Brewery

Dave called me on his new Mobile Cellular Telephone the other day while he was on a walk and I was home writing. I was at that crucial stage between picking at my hair and looking out the window–that golden moment that comes just before bailing out on getting anything written down at all. And he said he was three miles away from the Burnside Brewery. Which meant if we both started walking in that direction, we’d get there at the same time. To add to the serendipity, the Burnside Brewery–unlike other random places equidistant from both of us at that moment–serves up an India Pale Ale that’ll put hair on your esophagus and then comb it all the way down. You throw that much serendipity at a girl and she’d be a plumb fool to turn it down. It would be an insult to the universe. 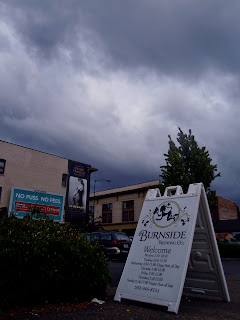 So off I went. It looked like it might could rain; in other words, it was a normal evening. Nothing to put on rain gear for. Walking is very helpful for my writing. In a good walk I can come up with all sorts of turns of phrase and plot points and such that are polished into brilliance later by my inability to recall them. Portland is noted for its rainfall but it isn’t a very big deal. Most of the time it’s like fog with punctuation. Sometimes it assembles itself into raindrops but a lot of times it’s just moist enough to make an old lady’s face-fur gleam like fiber optics.

We settled into a booth at the Burnside Brewery. The booths were elevated on a little platform. I’ve always been drawn to booths. When I was younger they seemed more canoodly. Now they just make it easier for us to hear each other. We sat on the same side to make it easier yet, and watched Saturday evening unfold outside. First Marilyn Monroe went by accompanied by a generic zombie princess. More zombies followed, interspersed with young people expressing their individuality in their arrangements of clothing that is either ripped or stripey or both. There might have been a zombie event in the vicinity or it might have just been the overflow from Voodoo Donuts on NE Davis meeting the overflow from Voodoo Donuts on SW Third. At any rate, a good time was being had by all, as required. Then came a little ripple of thunder. 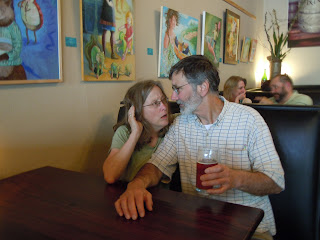 Where I grew up, there was a thunderstorm every summer afternoon at four o’clock. That is either true, or it is a tidy memory-packet I’ve assembled for my nostalgia kit based on a single week in 1968. At any rate, it was not unusual, as it is here. Here in Portland thunder is attended with flying eyebrows of surprise, and, in a public place such as the Burnside Brewery, applause. The air thickened abruptly. Soon the polite smokers hunched under their hoodies at the far end of the parking lot began to stream ominously into the building. Then the parking lot disappeared. The sky dropped a single raindrop a mile wide. The picture window grew a vertical river, in spite of being under wide eaves. Dave and I were so entertained by the scene that it took a while to notice bobbing tables beginning to accumulate in our peripheral vision. We glanced down from our platform to observe that the diners at tables were polishing off their beers with their feet off the floor. An army of wait staff began aerobic floor-squeegeeing. Bright yellow sandwich boards reading “CAUTION: WET FLOOR” floated informatively by. The bar split in two with the bow end sticking straight up before sliding into the sea. A pair of giraffes poked inquisitive noses into the front door. I don’t blame them. Noah probably didn’t serve a good IPA. 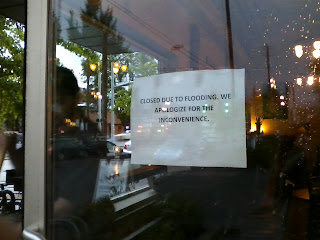 We got 1.02 inches of rain in an hour.  It makes sense. We average 2.5 inches for the month of May, but it had been oddly sunny a lot of the month. We didn’t have much time to make up the difference, so down it came. We’re a fun-loving bunch, but we’re not anarchists. Not most of us, anyway.