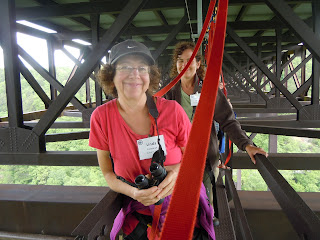 I’m comforted by things that do not change: the phases of the moon, the pandering of politicians. Even the bi-monthly why-the-hell-not five-dollar bump in the cable bill is reassuring in its predictability. Good or bad, each is evidence that the stars are still in their marching cadence. And so I am pleased to report that my friend Linda and I have demonstrated our core qualities yet again during our recent trip to the New River Birding And Nature Festival. There’s no need to recalibrate: everything is as it should be.

Linda is the one who arranged a murmuration of starlings for us at Cape Cod. It is Linda who was told by a Florida park ranger that although they had panthers, he had never seen one in his sixteen years on the job–whereupon she produced one for him. Somewhere, a unicorn is testing his horn on the fabric of reality and when he finally punches through, Linda will be there on the other side with a lump of sugar.

I, on the other hand, am the one who missed a connection at the airport in spite of having a five-hour layover. I am the one who sat alone and clueless in the rear car of a train in Munich while it was being decoupled from the rest of the train to be left at the station. If I were an astronaut, I would somehow be overlooked on the last shuttle back from the Space Station. 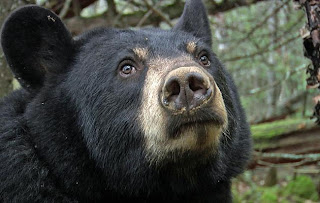 So at the birding festival, our cabin-mate Nina went on a field trip hoping to see, among other things, a bear. Sure enough, they were excited to find bear evidence steaming away at the head of the trail. Meanwhile, back at the cabin, LInda and I were working on a nap when she heard crunching outside the window and looked out. And there, of course, was a bear, snuffle-nose up and eyes yearning in her direction. The field-trippers were skunked, of course. There was no point in looking for a bear miles away from Linda.

I had been plagued by ticks all week. Linda had already pulled two out of my head but had found none on herself–not until our evening speaker mentioned that she was collecting ticks for research. That was the precise moment Linda’s tick took a stroll across her arm. It meant her no harm; it was just checking in to wave a couple of its little legs at her and go home to tell its little tick friends who it saw.

Oh, it was a grand week. As we approached the airport to return home I remarked that my own travel curse must have been overcome by her superior juju. We were booked on the same flight for our first leg. Ten minutes later the existence of the plane was revealed to be a cruel hoax and we were sent back to Charleston to try again the next morning at 4:30. This time we were booked on different flights. Linda’s was delayed. I sat in my gate as the minutes ticked past our departure time. There was no agent in sight and the assembly was getting more and more irritable. Fortunately an employee finally showed up and took me and the most irate passengers and stored us on the tarmac for a couple hours. 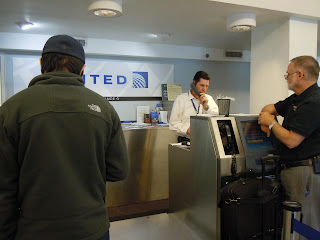 That was no doubt a relief for the people remaining in the terminal, but, sadly, our plane did not come with a pilot, and we had to be released back to the terminal for rebooking. The man sitting next to me was loaded for bear. Literally: he was headed for his dream vacation in Alaska that (as everyone in the airport was loudly informed) cost him $25,000. He hoped to murder a large brown bear, and his whole life (not the bear’s) was now ruined, ruined. The future dead bear was to be stripped of meat that would be donated to “the natives” (grateful and picturesque Eskimos could be seen squatting in an igloo in his thought balloon). And the hide and head of the bear would be stuffed and join his collection at home, photos of which he shared with fellow passengers between outbursts of rage: a world-record elk with a rack that could cradle a propane tank. A Rocky Mountain ewe in a come-hither pose, head turned back. And his prize, the last known Frumious Bandersnatch, erect and waving goodbye. He snugged his passenger-pigeon down vest tighter and stormed off to sue the airline.

About twenty of us returned to the ticket counter to rebook, and two hours later I was next up. The gentleman in front of me had been abandoned by the blonde agent, who walked out from behind the counter and headed away, saying she’d be right back. Forty minutes later she came back as a brunette. In just under three hours, I was rebooked for the next morning at 4:30.

Linda’s flight, meanwhile, was so late that her connection was in doubt. Two concourses had to be traversed by jetpack and five people had to drop dead for her to board, but by then she was far enough away from my sphere of influence that she was able to get the last seat and make it home.

I went back to Charleston for the night. The next morning we had a plane, a flight crew, and a fog bank you could bounce a quarter off of. I expect to come home with a drawl. Linda is planning a trip to Australia. I expect her to come back with a dodo. 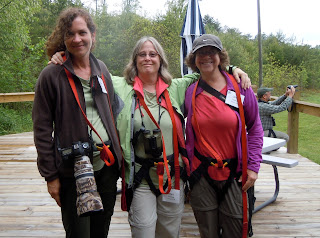