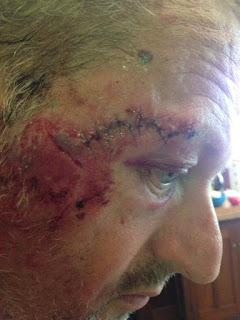 This is my friend Ed. He has a business called Pedal Roaster and he roasts coffee beans and delivers them by bicycle. He recently lost an argument with Willamette Boulevard, and this is the result. You’ll have to take my word for it that prior to his attempting to use his face as a brake, it was quite lovely, and no doubt will be again. But right now, his body is his temple, and his temple needs renovations.

I never ground up my face to this extent, but I’ve taken plenty of spills on a bicycle, due to the sheer number of hours I’ve spent on a bicycle and my casual relationship with the vertical. One time I landed on my face, too.

I was in Boston. I was riding my bike home from work in a snowstorm. The rule in Boston is you get five cars minimum through the intersection on a red light. If you actually stop for a red light you will get rear-ended, even if the person behind you could have stopped in time, just so as to acquaint you with the rules. Two or three minutes into rush hour this results in a total citywide turgid clog with everyone reaching into the glove box for the flask and honking lavishly.

The other rule is that you approach all such intersections with confidence and blinders and never, ever let the other guy know you see him.

I was coming up on one of these chicken games and applied my brakes and immediately went flatways and I entered the icy intersection in a slow, graceful, balletic spin, chin first. It was dreamlike: the flakes coming down, the street swirling 360 degrees, once, twice, the various frictionless car tires approaching sideways, and by the time our little Swan Lake episode was over, I was gazing into the tread of an automobile tire a yard away, and the driver was peering down at me.

“What’s your medical insurance?” he said.

He helped me up and we walked my bike over to his office, leaving his car in the intersection, where it wasn’t due to trickle out for another half hour anyway, and we went into his office, where he got out some instruments and began to pluck gravel out of my chin. He hummed happily. He clearly loved his work, although all Bostonians get an extra spring in their step when they’ve left their cars in the middle of the road.

“Looks like you could get by with a butterfly bandage,” he said. “But I could make it perfect with a couple stitches. Do you want some stitches? I love doing surgery.”

I was already feeling queasy about his gravel extraction efforts, and a little nervous about his enthusiasm. I declined. I have a thin scar now.

I don’t remember ever being billed. Maybe I wasn’t. Two years earlier I was living in London and waltzed into a clinic with a much more serious condition that was also related to my youthful indiscretions, and I got fixed up and sent out the door without a bill then too. It was slick. This is what it would be like if we had single-payer health insurance here.

I know Ed has insurance because he, like me, is a retired letter carrier with a decent benefits package. That’s the sort of thing middle-class people used to have before unions were revealed to be a plague on humanity during the Reagan administration. We’ve been duly educated in that regard, and also are up to date about the horror of socialized medicine, so there’s no danger the insurance industry is going to have to give up a ton of our money anytime soon.