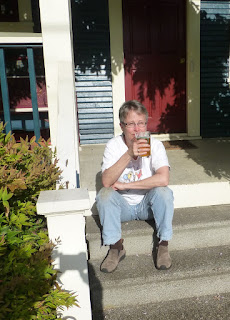 It had been one of the first warm days of spring, and I was preparing to enjoy the living crap out of a few simple elements: a gentle breeze, a nice IPA, and a seat on the warm concrete front steps, just in the last perfect patch of sunlight. Earlier, it had been too hot; if I moved into the shade, one foot over, not quite warm enough. Friendly people walked by, neighbors waved. I’m not much of a sunshine person but I do love it when the sun warms you just enough and no more. The beer was splendid.

Just one thing was a little off. I smelled dog poop. And I am not a fan.

I hardly ever smell dog poop. By some miracle the entire society has changed over the last three decades such that people keep their dogs on little strings and bag up their poop. All this was basically unthinkable until not that long ago. There used to be dog poop everywhere.  Your neighbor’s dog poop was in your yard and your dog’s poop was in your neighbor’s yard. Kids rolled around in it. It was chiggers and dog poop all day long. 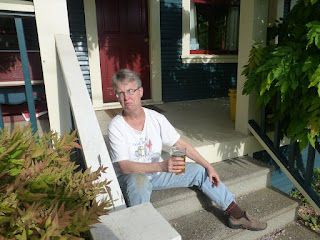 “You look comfortable,” my neighbor hollered, and I raised my beer, and said “Except I smell dog poop.”

Horrified, she was, I tell you. She’s decades younger, and that’s how much things have changed. Anyway, I was sure. I do have a poop field guide, but I didn’t need to check it. It smelled like my childhood: honeysuckle, Pixie Sticks, thunderstorm ozone, and dog poop.

I checked my shoes. Clean. Some time in the ‘nineties, my employer quit offering plain-soled shoes for our postal uniforms. You could only get the real grippy kind with a bunch of topography on the bottom. I hated them. I hated them because of St. Clair Street. There was one block of St. Clair that had a bunch of apartments, all pavement and parking lots and no dirt or greenery. And because this is Portland, and dog ownership is required by law, that meant there were two hundred dogs in that one block. Mostly little ones. Their devoted owners stuffed them in their purses with the makeup and the packet of tissues, walked outside, extracted them and set them on the sidewalk until they produced a pellet, just like popping a Pez. Probably 95% of these good people bagged the poop, but that still left a major raft of turdlets on the pavement. All I had to do is glance at the letters in my hand for one second and it was squish city. My plain-soled shoes could be depoopulated with one or two good scrapes on the curb, but the grippy ones with the waffle soles would get all mortared up. You had to lean up against the apartment building and turn on the spigot and use a stick to get it off. It took minutes and you still had to finish up with the indoor-outdoor carpeting at the apartment door. 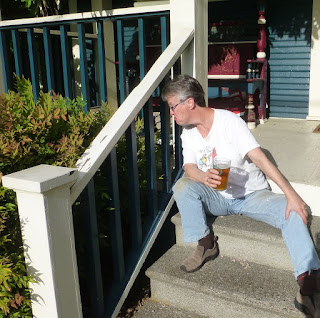 Anyway, the poop was not on my shoes, but it was real close. Because I have a scientific mind, I found it by following some flies. It was right by the steps, about a yard away. So.

I really, really wanted to enjoy my seat in the sun with the beer and the nice passing people. I could have gotten a shovel and dug it in, or bagged it and put it in the trash, but half the point of being there was to be there, and not be somewhere else, doing some other thing.

The scientific term for this is “lazy.” I looked at the flies. They seemed happy. I thought: let’s try something. Tastes differ. The flies clearly like the smell of dog poop. What if I were to quit wrinkling up my nose, and become a fly, and imagine I like it too? I’ve always been credited with having a good imagination. The world is filled with annoying things, and we must do what we can, and then let the rest go. I leaned back. I owed it to myself, to the world, and to the sainted brewers of Ninkasi Total Domination India Pale Ale to give it a try. It had not been a high-capacity dog.

It worked. It took a second beer, but it worked.