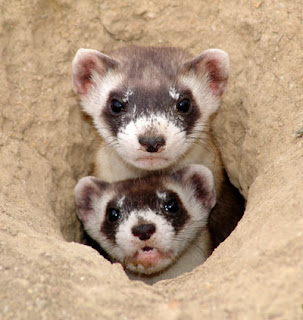 Says here in the paper they’ve got a boot camp for black-footed ferrets, and there isn’t a day so fine that it can’t be improved by news like that. I can see them now, all those ferrets lined up doing push-ups, like furry piano keys. The black-footed ferret is a carnivorous, tubular mammal of the American midwest, or at least it was. Now, after a brief period of extinction, it is a tubular mammal of a tiny den in Wyoming. After the discovery of that den, it was estimated that the total world population was 24, and concerned people immediately set about to improve the numbers. There was a sperm collection drive, which was probably good for their spirits, and the output was frozen for future use. Essentially, they collected iced ferret seeds to see if they would sprout. And they did. They’re in the thousands now.

The ferrets are sent to Black-footed Ferret Boot Camp to toughen up for reintroduction into the wild. Without training in obstacle courses, they are likely to sit and stare up at circling hawks while waiting for macerated prairie dog pellets to drop into their faces. The boot camp has been a successful operation, and hard to object to. But cattlemen do have a problem with it. Ecology and economy are intertwined. Ferrets eat, primarily, prairie dogs. In fact, 91% of the black-footed ferret’s diet is prairie dog, rounded out with Prairie Dog Helper and parsley. And prairie dogs mess up pasture that cattlemen like to claim for their hamburger. So you’d think that the cattlemen would like to produce more ferrets, but you’d be wrong. See, they already mostly got rid of the prairie dogs–they poisoned them right up, which is why the ferrets that eat them got in so much trouble, and now that their status has improved from extinct to endangered, the ranchers are afraid some of their hamburger-growing land will get set aside for prairie dogs again, and they’re right. That’s just what will happen.

What’s out of balance is the cattle population, of course, but you’re not likely to get someone to say that whose living depends on running cattle. I get that. Long ago, I made a meager living as a scrimshander. I engraved intricate art on elephant ivory and sold it in a local open-air market. I didn’t feel too good about buying the elephant ivory, which was legal at the time, but in those days what was considered much worse was using whale ivory. This didn’t stand up under scrutiny. Even then, although using whale teeth did make a dead whale infinitesimally more valuable than a live one, no whale was ever killed for its ivory. Whereas that’s precisely what the elephants were being killed for. But whales were a big focus then, and folks wanted to save them. The proper thing to do was to use mastodon ivory, which was also more or less available, but harder to engrave. Mastodon  ivory would have been a more ethical choice, because they had already been extinkerated by people who were not, precisely, us.

There is a similarly dire number of Siberian tigers left in the world, their habitat reduced by human encroachment. I will here state without equivocation that a Siberian tiger is worth more than a human–I might even say a billion humans. Many will disagree, citing the sacredness of the  human soul, even though the human soul is not magnificent and stripey. I do not understand what in particular is so special about a human soul, which presumably outlasts its container, according to people up on that sort of thing, nor do I understand why the human soul is any less well off being sprung free by a pouncing tiger rather than a wasting disease. But I will not argue the point. To me, the worth of the tiger is only obvious, and those who disagree with me are not liable to agree with me on much else, either.

There are those who would say it’s all well and good for me to favor the Siberian tiger, since I’m not in any danger of being toothed by one, and that is true. Tigers don’t go in for humans much anyway, but to state the same point more relevantly, I feel the same way about grizzly bears, and I haven’t camped out in Glacier Park for the last time. And I do have a plan in mind should I be pounced upon by a grizzly bear. I plan to scream, wet my pants, make with a flurry of ineffective little fist-pummelings, and faint dead away just before I am julienned by a swipe of the bear’s paw. I have no plans for my soul after that, but should it survive my personal extinction, I plan to haunt people with it who would go after the grizzly bear in my honor.

As to my own earlier ethical dilemma, it was resolved when I quit making scrimshaw and signed on as a mailman. And now mailmen are nearly extinct, although I believe I can state it was not because of anything I’ve done.