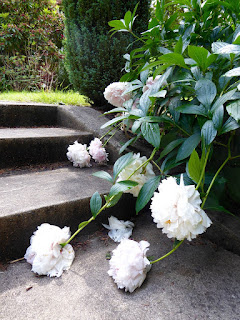 We got the standard load of rain at the beginning of April, right on schedule. According to plan, our reservoirs began to fill up. We get our drinking water (don’t tell the Third World, but we poop in it too) not from snowmelt but from a pair of dammed-up valleys just this side of the big mountain. So those spring rains are important and everyone knows it, which means by the time it has continued well into May and June, people are looking trudgy and damp and tipping water off their hats and whining quietly, “It’s not the rain I mind so much, I just wish it would warm up a little.” What they mean by that is it’s totally the rain they mind, and also they wish it would warm up a little, but it doesn’t. Nobody puts in tomatoes until Memorial Day. Peonies bloom and are instantly flattened by hail. Kids skid around in the mud with soccer balls, and then the Rose Festival Parade happens on about the second Saturday in June, and the sun comes out the next day and sticks around until November.

That’s what’s supposed to happen. This year, it quit raining on April 15 and you couldn’t apply a postage stamp with the moisture we’ve had since. People smiled at first and made like they were going to try for early zinnias but mostly didn’t, but then it kept not raining, and it got a little warmer, and we had day after day of sunshine, mid-seventies, with a light breeze. Peonies went ahead and bloomed in all innocence and were not struck down for the sin of pride. The days were so pleasant I found myself thinking: this sure has been a nice summer. Hope it doesn’t get too hot later.

I dislike hot weather a lot. The juices that are designed to operate my personal physical plant settle into jam and strand me in a lawn chair, too morose even to ask someone to make me a gin and tonic. Even my creative juices begin to gum up in the heat. So I was feeling pretty pumped about this summer, so far. 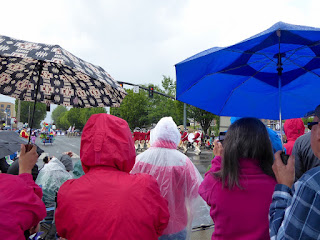 Then I saw the weather forecast. After eight weeks of sunshine, we were due for a decent downpour, last Friday evening. It was going to rain hard Saturday. Sunday it would begin to clear up again. Of course! What happens Saturday? Why, it’s the Rose Festival Parade! It was going to be wet horses, soggy princesses, and drowned tuba players all day long. Right on schedule.

And that’s why it’s been such a nice mild summer so far. It isn’t even summer. I don’t recognize springtime unless the rain is sheeting off the roof and you have to re-park your car sometimes to even up the moss. We have completely bypassed spring. Everything’s all messed up.

All of which means it’s about time for The Oregonian to run another smug climate-change denial piece of crap by Dr. Gordon Fulks. Dr. Fulks has a string of vintage science degrees hanging off his resume like dingleberries and can’t see what’s right in front of him because his own ass is in the way, but The Oregonian likes to give him a platform whenever the tooth fairy is out of town. 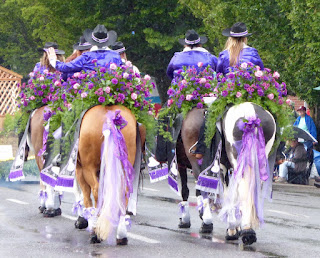 But Saturday, at least, we could imagine that everything is still all right. Thunderstorms, which are rare here, even made the forecast, and we trotted off to stand in a puddle and watch the parade. Lightning! What is the highest point of the parade? Why, that would be the elevated dais on the float occupied by the Rose Festival Queen, wearing a metallic tiara. This could be fun.

But the Reser’s Fine Foods float caught on fire, the reservoirs aren’t anywhere near full, Dr. Fulks continues to fail to die, and the feckless chump in Washington is working his fanny off to suck the last fossil fuel out of the planet and put it in the air. Don’t be distracted by all the flowers: make sure there isn’t a horse’s ass under them.