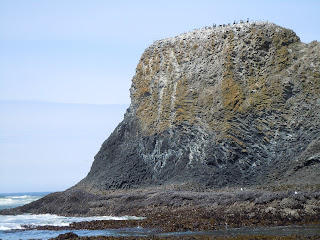 I came upon a glory the other day, a sight to behold–made me all trembly. And it’s a good thing Dave wasn’t there for it, or he might have keeled over dead, and not in a good way. I saw five billion murres in one place. He’s in favor of murres but thinks they are best in small and manageable numbers, such as One.

My murres were massed on several rocky outposts in the Pacific Ocean, jammed in together, which is what they do when they’re brooding. I have many similarities with my cliff-roosting cousins, but there are divergences. For instance, no one wants to be around me when I’m brooding. 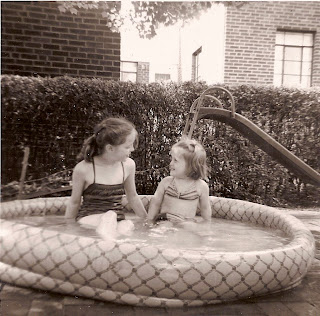 Also, murres are good at flying, whereas I’m only good in the gravity-assisted direction and for a very short time. They are also good swimmers, and I am not. No one taught me when I was very young, which is the time to do it. Dave learned at an early age, himself. He says it was easy. The hardest part was getting out of the burlap sack. Murres learn very young. They are punted or fall off the cliff and we don’t hear from the bad swimmers again. They are excellent divers; they can be underwater for a couple minutes, where they are said to be very maneuverable. I am also. Once I quit struggling, I expect you could tow me just about anywhere. 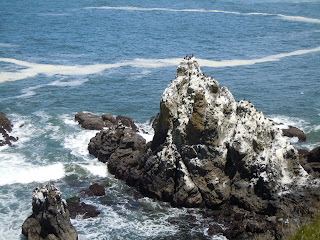 Murres gather on cliff tops to breed and lay eggs. The eggs are very pointy so that they will spin in place like a dreidel instead of rolling off the cliffs. And this is important because the murres do not bother with nests. According to the biologists responsible for murre egg monitoring, the female murre turns around and takes a good look at her egg when she lays it, so that she can recognize it among the other thousands of eggs on the cliff later. Supposedly each egg has a slightly different pattern and is thus recognizable, but really they all look the same–they look like shit-spattered rock, which is surprisingly handy for camouflage. One egg is pretty much like another, and that too is apt, because one murre is pretty much like another. I’m not sure it matters much who’s incubating what. Any way you look at it, you’re getting a murre out of it, and you shouldn’t be looking for anything else. This keeps them emotionally stable too, when bald eagles come flying patriotically in to eat an egg. All the murres flap and holler for a while but after a certain point they all go away and hope for the best, and the eagle makes her selection, and Gladys and Ethel can duke it out later for the remaining egg. “That’s my egg,” Gladys says, and Ethel says “suit yourself,” and goes off somewhere to get a little reading done. Once all the kids have fallen off the cliff, the girls molt and stick around for an extra month, maybe form a book club, and they don’t rejoin their mates and young out at sea until their ‘do grows out. 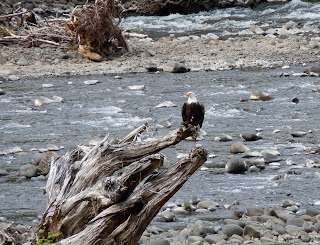 Just between you and me, a lot of field biologists haven’t dated in a while, and are inclined to idolize their mothers. It’s possible murres are carefully memorizing their own eggs, but I submit that any time something drops out of your butt, you’re liable to turn around and have a look. I’ve given this whole issue a good half-hour of binocular time, and these ridges are coated–coated, I say–with identical birds. I believe if any one of them sees an unsat egg, he or she is going to sit on it. If it cheers up a biologist to believe that it’s their very own, so be it. This looks less like a paragon of motherhood than a cocktail party with unsupervised children up past their bedtime. They find a big rocky promontory, they shit all over it, drop eggs on it, and then punt the little buggers over the edge when they achieve fluff. Then they get a new haircut and lounge around for a month and no one even talks about the kids. 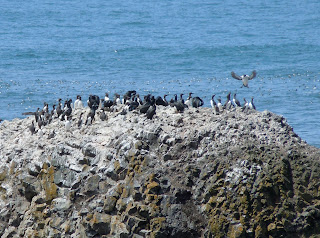 Murres are also known for preening each other, although it is unclear if they know they are doing this, or think they’re taking care of their own hygiene and can’t tell each other apart. Both sexes are identical. The description in the field guide is “black head with white underpants,” or “underparts,” depending on your trifocals.  Scientists insist that when they fly to their roosts on the rocky cliffs, they unerringly find their own eggs, and it is true that landing is a chaotic affair; they sort of fold up and drop in wherever they want to, without bothering to see if someone else is already at that spot. There’s a lot of flapping and shoving and eventually everyone settles down until someone else bombs in. This is the evolutionary reason they have developed webbed feet: to avoid head punctures.

Murres are large members of the Auk family, named after their entire vocabulary. There was a larger one, but it is extinct, and the wise murre reins in her aspirations. 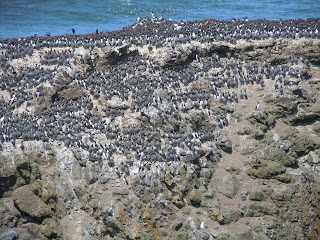 This particular platoon of murres is lucky enough to have its rock right in the sea, so that the punted chicks, which cannot fly, have a high likelihood of making it to the water. Other colonies nest on cliffs just inland and the chicks have to bump along a bouldery beach for quite a distance before reaching the sea and a ticket to adulthood, a path strewn with predators and tragedy. This is an evolutionary method that goes at least as far back as the 1950s, when our parents sent us out to play in traffic, assuring that children who do reach maturity are those genetically blessed with insane luck.