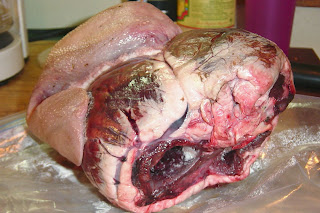 On Valentine’s Day this year, Dave parked himself in a recliner and watched basketball on TV all day while I fetched beers with fluttering hands and little mincing steps, pretty much turning the relationship as it exists the other 364 days of the year upside-down. Hey, it’s my pleasure. Then on Sunday it was back to Dave cooking, and, in a nod to romance, he made the whole family a lovely meal of caribou heart and tongue. There are several recipes for caribou heart on the Internet, and many of them seem fairly authentic, calling for such staples as dried vegetables and diced tundra. In most of them, the heart is stuffed. You assemble the stuffing and cram it in the pockets of the organ. Stuffed Ventricles does sound like a medical condition, and we won’t even get into what the other entree, Tongue Tacos, sounds like, although it is romantic.

My niece Elizabeth moved here from D.C. only a few years ago, and on the occasion of the first birthday she celebrated here, Dave asked her what she wanted for her special dinner. To which she replied: “Oh, anything, I don’t care,” thinking that this was polite. She found out just how far polite gets you in this branch of the family. Dave will cook for anyone on any day, but he dearly wants people to tell him what they want, and not to intimate that it doesn’t matter. Elizabeth’s birthday dinner that year was cow tongue and Brussels sprouts. Every year since she has given a very meticulous itemized response to the birthday dinner question. Still, Dave cooks odd things because he likes them himself, and the nieces and nephews can never be sure what’s going to show up on the table at our near-weekly Sunday dinners. Elizabeth, in particular, seems to quiver a bit and glance around nervously when she shows up, prepared to fill up on crackers, and is visibly relieved whenever a meatloaf makes an appearance.

We come by a caribou heart in the freezer in the normal way–by marriage. Some families are introduced to piroggis or pickled herring or the like when someone marries in; when our nephew Michael found and snapped up Andrea, we were treated to a variety of delicacies personally slain by her father or brother and sent down south, and it just doesn’t get any more special than that. Early on we were introduced to seal and whale, beautifully presented in salad form. The whale was fine. Wouldn’t you think seal would be delicious, all that fat floating around in the sea, like a bobbing bundle o’ bacon? Seal is one of those acquired tastes, though, and it really needs to be acquired before you’re out of diapers, or it’s too late. Sources I Googled (oh yes, I checked afterwards) claim it is in fact “inedible,” even though we edded it. Still, I felt very honored to have had the chance to push it around my plate.

Several members of our Sunday dinner conclave will eat absolutely anything, and have had ample opportunity to demonstrate that over the years. But we will always have cheese available for Elizabeth, and beer works for me.