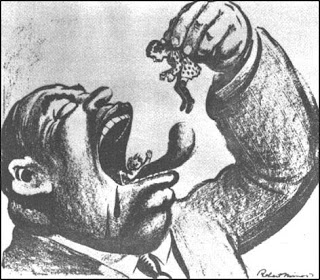 We were ushered into a spacious room for the press conference. A row of people stood in the back, holding hands and humming quietly. They were barely visible behind Corporation, who was even wider than anyone had imagined. He was wall-to-wall. A trim man in a suit and sunglasses was wedged in on one side of him, expressionless.

Corporation unfurled a pudgy hand and acknowledged our presence. “Please. Call me Corpo,” he said. “Thank you all for coming.”
He clasped his hands together and took a deep breath. “You can’t imagine the pain I’ve endured all these years, with people denying my very humanity. But I’m just like you,” he began, reaching behind himself and executing a delicate, common-man tug at his underwear. “I put my pants on one leg at a time.”
Pants?
“Pants, airs, the electorate, the point is I’m putting something on. The point is I have feelings. I’m not a machine. I have dreams, I have assets, I have liabilities, I have workers all over the world. Some of those youngsters in Sri Lanka, my God–” Corpo paused briefly to gain control over his emotions–“bless their tiny little bones. They’re worth a hundred of my workers in America. I mean it.” 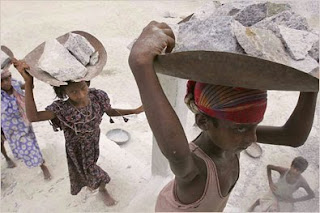 The man in the suit and sunglasses leaned over and whispered something in Corpo’s ear.
“I’m just speaking literally, of course. All of my workers–hell, all of us–are utterly equal in my eyes. From the coal worker in West Virginia, to the shareholder, to my little buddies Credit Default Swap and Sammy Alito, we’re all human, we all have a voice.”
His own had begun to tremble. “They’re like members of my own family. I swear, I couldn’t love them any better. What would I do without them? I’ll never know, fortunately; there are always more. And after the coal is gone, and the timber is cut down, and the shale 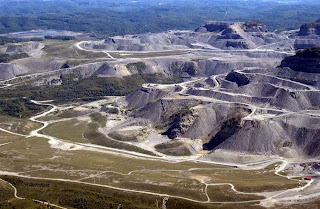 oil is extracted, and the surviving workers are taking their well-earned leisure with their black lung settlements or what-have-you, I’ll still be here. Not for them, necessarily, but for their children.” Overcome, Corpo reached into his pocket and mopped his nose with a damp Haitian.
But what will their children do? Say, in West Virginia. After the coal is gone and the mountaintops have been blasted into memory.
“Oh, the opportunities I have provided! Just think what the little scamps can do on a nice flat surface that they couldn’t do before. Marbles. Lawn bowling. It’s all good. Where the Lord closes a mine shaft he opens a trapdoor.”
The row of people behind began to hum louder and sway back and forth. The music swelled. Corpo’s pants swelled.
“And now, thanks to the highest court in the land, my rights have been protected. My God-given rights as an American.”
Free speech?
“How quaint of you! That’s been done. Every Tom, Dick and Harry has that. Even the ladies, the dear little chatterboxes! Where’s the value? No, my friends, free speech is yesterday’s news, now that Expensive Speech is the law of the land.”
The man in the sunglasses turned and applied a little water with a turkey baster on the side of Corpo’s face. The chorus behind burst into song. Corpo dabbed moisture from the corner of his eye and began to sway with the group.
“We shall overrun….some….daaaaay!”
By Murr Brewster|2021-11-09T21:30:44-08:00February 3, 2010|Uncategorized|4 Comments