My parents’ generation rolled out of the Great Depression and into Another Great War and all of this inspired them to spawn massively. There’s an ocean of us Baby Boomers scraping scale against fin and we are just now heading back upstream to get our due.

Our parents got their own Social Security and most of us will too, but there are problems. Not as many people are out there working. There are too many of us and not enough of the younger ones to keep it all propped up. It isn’t our parents’ fault. As soon as they saw what they’d produced they did their responsible best to cull the herd. A lot of things are better in moderation, and Baby Boomers are no exception. So they took us for drives in their Oldsmobiles where we could rattle around without seat belts and they encouraged us to hang our heads out the window, where, if you stuck your tongue out, you could dry it until it felt like a loofah pickle, and then pull it in again, if you had not been taken out by shrubbery. And they took us to picnics and invented the three-legged race for us, so they could suck on their martinis and cigarettes for a good long time without having to check on the kids, who could not have gotten far. That thinned out the population a little more due to trampling, although I did okay, because I was small enough to just flap behind the big kid they hooked me up to, like the tail on a pheasant.

They bolted wheels to our PF Flyers and sent us out in traffic. They put tiny marshmallows in our casseroles. They made us do sit-ups with our legs out straight. They smoked at us. They encouraged us to lie out in the sun slathered in baby oil and insecticide and leave them alone. They sent out big dogs in roaming packs to prey on the weak.

They did their level best, but a majority of us failed to get sliced out, and so they ginned up another huge war for us and made everyone sign up. That peeled off a bunch of kids and diverted some to Canada, so the Social Security picture was looking better all the time. 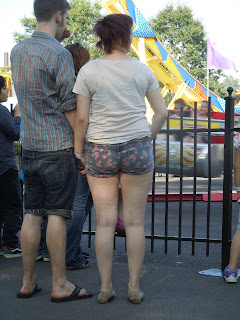 People are worried that there won’t be enough money for today’s kids to get Social Security, but they shouldn’t. Another far-sighted president from the Greatest Generation took care of that already. Richard Nixon had likeability numbers in the minus territory and determined that as long as people  had cheap groceries, they wouldn’t send him packing. So he subsidized corn and set about to create a whole new genre of products that resembled food in many ways, and we raised a whole new generation on them. Now, although the number of children has gone way down, their total mass has remained constant. Shoot, we’ve got enough money to see them to age 70, probably. And that should cover it.