A Flap Of Skin 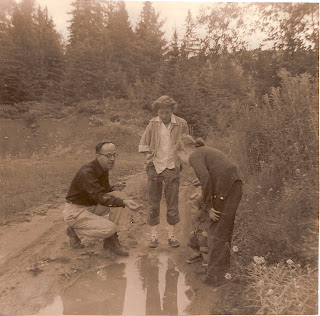 My daddy knew everything. You could ask him why the sky was blue or why the leaves turned colors or what the name of that mushroom was and he would tell you, right down to the wavelengths and the refraction and the chromatophores and so on. So when I asked how you could tell a boy baby from a girl baby, and the whole room tensed up, I didn’t really notice. I was pretty sure he had the answer. Just that right then wasn’t a good time. 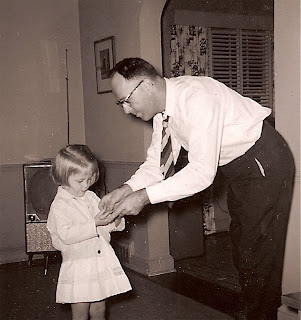 It was easy enough to tell boys from girls at my age because of the clothes and haircuts, but little babies all looked alike. I waited a day or two and then, since I still wanted to know, I asked again. Mom cut Daddy a glance and discovered something urgent to do in another room, and Daddy pulled the drawing paper out of the secretary and got a pencil. He started to draw and explain, but with none of his usual vitality. The salient feature in his illustration–in profile, as I recall–was what he called “a little flap of skin.” I looked at the drawing and suddenly remembered how you could tell a boy from a girl, and also that I probably shouldn’t have brought it up.
In my defense, at that point I didn’t have a lot to go on. My only brother was seventeen years older than me and out of the house. Dad was the sort who buttoned the top button of his pajamas. I didn’t have a lot to go on, but I did have Danny Hall.
Danny Hall was the inordinately proud owner of the first little flap of skin I ever saw. He had made a point of showing it to me not that much earlier. It was a curiosity, for sure, but I had no idea what it was for, and hadn’t made a connection with that whole boy/girl thing. As far as I knew, it was just something that Danny Hall had. He was always coming up with stuff. I do remember he was interested in what was in my pants, but that struck me as odd. I didn’t have anything in my pants, not that you could point to, or with.
Besides, as gullible as I tended to be, I was getting to the point that I didn’t trust Danny Hall that much. Even if you couldn’t figure out what he was up to, you could be pretty sure it was no good. That same summer he had found a plain white rock and he held it out to me and told me to lick it. Even though I hadn’t figured out it was a petrified dog turd at that point, I didn’t lick it. Because why would I lick a stone? Especially one of Danny’s stones. 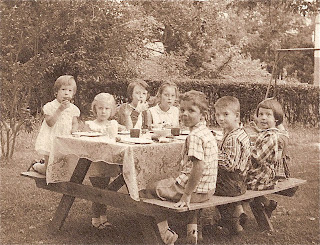 The Halls lived on the end of the block, and they had a giant mimosa tree that was gorgeously climbable even to abbreviated sorts like myself. We used to play over there a lot; we had to make up our own games, because plastic and electricity hadn’t been invented yet. It was a wholesome time. So mostly, we played World War Three. This involved a lot of hiding behind bushes and spying and such. That’s what we were playing when Danny lobbed a brick way up into the air and it came down on my head, and don’t think I can’t still show you exactly where it landed. I wasn’t much of a crybaby but I screamed bloody murder. The closest grownup, unfortunately, was weird Mr. Balderson, who snatched me into his kitchen, clipped out a bunch of my hair and began boiling washcloths and applying them to my head. By the time my mom intervened, I was still bleeding, newly scalded and hadn’t stopped bawling. Danny Hall was apprehended and brought in to defend himself, squirming in his closely-gripped shirt. He had a defense, all right. “I yelled BOMBS OVER TOKYO!” he protested, all innocence. 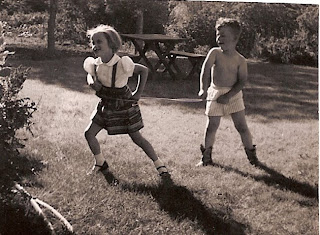 So back to Danny’s penis. Danny’s penis reminded me of nothing so much as one of those little valves you blow up a vinyl inner tube with. I didn’t say that out loud, which, in retrospect, was probably a good idea, because Danny was the sort who might have sensed an opportunity. Anyway, it was his flap of skin that popped into my head when Daddy drew his somber little picture. I got it right away. I wished I’d asked him about the phases of the moon instead.
I didn’t keep track of Danny. I did hear, later, he had become a hoodlum. Much later, I heard he had become a lawyer.
By Murr Brewster|2021-11-09T21:30:18-08:00February 27, 2010|Uncategorized|22 Comments