It’s hard to work up a heap of sympathy for your average suicide bomber, but I felt a twinge for the fellow who failed to detonate his underpants on that flight into Detroit. If I were planning to go out in a blaze of glory, I wouldn’t want my underpants to survive me, either. And don’t think it couldn’t happen. On New Year’s Day a few decades ago here in Portland, a fellow opened up the gas line to his house and blew it to smithereens. I was two miles away, and it was still the loudest sound I’d ever heard. There was nothing left of his house but the mortgage, and he took out the neighbors’ houses, too, but there he was, dead in his yard, fully intact in his underpants. They probably weren’t even riding up.

I don’t think men’s underpants do ride up. I never see men making an adjustment or anything. Oh, they may fiddle around in there, but it’s always the package they’re fiddling with, not the wrapping. A female suicide bomber would have been a complete success. If we were supposed to add a liquid to the explosive powder in our underpants, we could do that during tea with the Queen and no one would ever know. Every day requires dozens of such surreptitious adjustments. We’ve got it down. 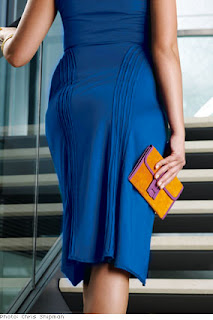 As a letter carrier, I had to slide out of the tall driver’s seat onto the pavement all day long, and the entire right side of my underpants disappeared every time. It only took a few steps to arrange my satchel as a shield and perform the extraction, with no one the wiser.
Then I’d start walking my beat, and my recently-thwarted underpants would get bored and irritable. So they would scout out the territory until, within a block, they had located the exact largest circumference on my ass, and then they’d settle in and make a nice indentation to flag the spot, because they did not yet have sequin-and-flashing-lights technology. There they would remain, snug as the Tropic of Capricorn, with all of Brazil pooching out to the north. You can tug them back to the equator and make it look like you’re just stretching your back, but you’ll be doing it all day long.
Women of a certain age that is not mine wear the thong, in part, to avoid this particular constriction. Well, if that ain’t like curing insomnia with a whack upside the head, I don’t know what is. A deliberate wedgie is still a wedgie. No thank you, Junior. It’s hard enough taking my clothes off some days without having to excavate. 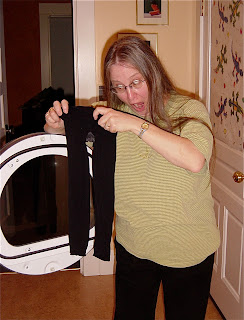 To really put the cherry on top of the whole underwear experience, though, you must add tights. Tights are sold in a variety of sizes, none of them mine. I am parked on the cusp, and my choices are to tuck the tights under my bra and watch them puddle up at the ankles, or get the ones that come out of the dryer eighteen inches long and fit like a sausage casing.
There is, however, no avoiding “control-top” hose, even if you were not planning to ask anything of your underwear you do not ask of yourself. Control-top hose contains Spandex, a synthetic fiber developed by bored and irritable Nazis. The function of the Spandex is to round up fat wherever it is hiding and shoot it out the top of the hose. The effect is that of a billowing flesh fountain on a nylon pedestal, and gosh–ain’t that the look we were going for, ladies? Comfy, too. It takes five minutes to argue them all the way up to your waist, but sadly, fifteen minutes later, the tights have retreated to new ground quite a bit south of ideal. Enforcing a waddling gait, the crotch is now hanging six inches below your own, and no, you have nothing to fill that space up with. Not unless you have explosive powder.
By Murr Brewster|2021-11-09T21:31:01-08:00January 16, 2010|Uncategorized|16 Comments