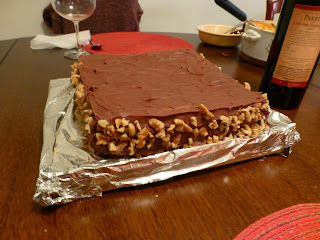 Dave likes to tell people I’m a great dessert-maker. Not because it’s true, but because he really likes desserts and doesn’t want to make them himself, and I will. I make them with love. Also butter, chocolate, cream, sugar, and nuts, which are more important. You could take all those things and put them in a bag and swing them around your head a few times and you’ll get something out of it that people like. I actually have no idea what I’m doing when I make dessert. All kinds of shit can go wrong. There’s hard ball this, and soft ball that, and you can’t make things reliably fluffy unless you know what spells to cast. Or, you know, some chemistry.

Take my annual Thanksgiving dessert. My sister-in-law was in charge of dinner years ago and so I ran it by her. “I was thinking of making something different this year–I cut it out of a magazine,” I said. She was skeptical. “Does it have chocolate?” she wanted to know. I consulted my clipped recipe. “It’s called “Fudge-Slathered Fudge Cake,” I said. “Bring it,” she said. A tradition was born.

We change traditions in this family like we change our shorts. A couple years ago Elizabeth showed up lugging a forty-pound side dish of Corn Pudd’n. We all had a spoonful. “New tradition!” we sang out in unison. “It’s a Paula Deen recipe,” she said carefully. “You do not want to know what’s in it.”

I still don’t know everything that’s in it, but part of it is made from pureed fat person.

The Fudge-Slathered Fudge Cake was a hit too. It looked weird, but it tasted great. The cake part gets all its lift from egg whites, momentarily, and then when it cools it shrinks and craters into something with all the heft of a communion wafer. I was horrified that first year, but it comes out that way every time. The cake is only there to hold the frosting up, and the frosting is terrific. But the second year the frosting didn’t set up. I started slathering it on, and it kept puddling up around the bottom like saggy pants. I was horrified, but the family gathered around it and monitored the lava flow with spoons and fingers, and everyone was happy. Some years later I stumbled onto a way to make it work right and that part has been fine ever since.

But it’s a dessert. It’s not going to behave just because you want it to. Every year I find a new way to 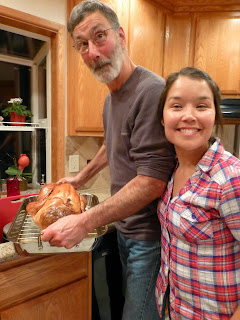 screw up the fudge cake. The egg whites got particularly exuberant in one corner this year so the whole cake was on a slant. The frosting requires bittersweet chocolate cut up so that it melts into the hot butter/cream mixture. I probably bought fancy chocolate the first few years but then I thought good ol’ chocolate chips would save time and work just as well, and they have. This year I had some leftover Mini Morsels. I figured teeny chocolate chips would melt even faster, which would have been true, if it hadn’t been completely false. I kept stirring and stirring and those chips weren’t going anywhere. What sort of chocolate chip does not melt when plunged into cream and butter that has been boiling for twelve minutes? Why, little plastic chocolate chips, evidently. I mashed them against the sides of the bowl until most of them had succumbed, but not all. It looked like frosting with little fairy doots.

The cake tasted fine. I think everyone was thankful for it. And,  thankful that I’m not in charge of the rest of the dinner. That’s another tradition.