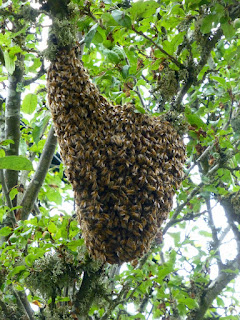 I was walking under a tree the other day when I noticed a fizzing knob hanging from a branch which, upon closer inspection, turned out to be not a visual migraine, but a swarm of bees. A living, vibrating unit of life, admirable in every way. My friend tells me I could have knocked the whole thing into a box and had me a swarm of my own, as long as I managed to bag the queen. It ain’t over if the fat lady clings. The queen is the key to the whole swarm. She is endowed by Nature with something special.

It’s hard to know how to feel about this. On the one hand, I admire a good cohesive social group. I believe in comity. I believe we can and must band together for the common good. If we pull together we can all have honey. And if we don’t, we’re just a bunch of lone rangers in pollen pants. On the other hand, it’s a little frightening to think of a mob following one individual so slavishly.

We all learned how this works in school. The queen runs the outfit. She decides who the boy bees will be, and they lounge around in tiny togas waiting for a chance to inseminate her. She decides who the girl bees will be, who, bless their hearts, are in for a lifetime of work. At some point she even designates a successor, who becomes a queen by being fed Royal Jelly, which has 100% of your daily requirement of charisma. The entire operation runs smoothly but it still has all the hallmarks of an authoritarian dynastic state.

Which is fine most of the time, but what if it’s a bad queen?

What if it’s a Nestle queen, and she decides to jack up her personal net worth by directing her workers to decant the community honey into little tiny individual flavor packets and sell them back to the drones at an obscene markup? They’ll do it, too. They’ll do anything for jobs. And the drones will all buy the flavor packets. I don’t know why, but they will. They’re biddable, those ones. It’s a plutocracy waiting to happen. 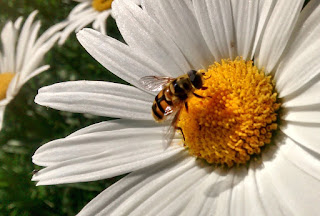 Bees get along together so well not because they have no imagination, but because they’re all imagining the same things. That, and they all look alike. They’re soft and fuzzy. But consider the ants. Ants are reputed to work together well too, but half the time you look at them they’re hauling other dead ants around. And that is damned fishy.

Let that be a warning to us. It’s one thing to work cooperatively together, but if everyone is piling on board a charisma train, somebody ought to be paying attention to where the tracks lead.