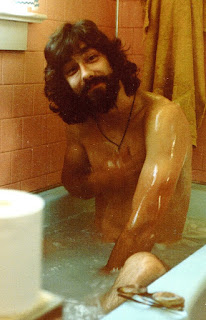 When I met Dave he had a beard. It wasn’t the greatest beard of all time but we were all hippies back then and beards were just part of the package. He did have one of the finest heads of hair I’d ever seen. Long and glossy and spectacular. I believe the beard had less to do with fashion than a sincere desire to not get up every morning and scrape his face. I couldn’t argue with that. But after a while, when I knew I was worth something to him, I did let on that it would be fun to see it trimmed up a bit.

He looks better with a trimmed beard. Most men do.

So we’re going on 43 years now with me mentioning about twice a year that a little snip around the edges might be nice. One of the best things about him keeping his beard short is that it doesn’t hide his neck, which is long and glossy and spectacular. He’s not moved by this argument. 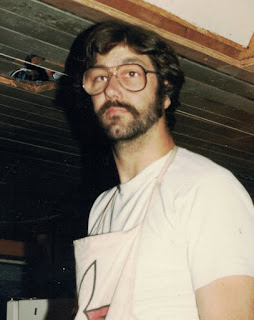 I’ve seen his face two or three times, when he had to shave his beard for work. I’ve still never seen his upper lip. He’s got a dimple in his chin. What the hell. Mostly he used it to store facial hair, I guess, so it was a surprise to me. He always grew the beard out immediately and there’d be about a week or two when it was all sexy and short and then we’re back in beardville again.

This is what comes of being a couple union blue-collar workers. We save oodles on wardrobe but some of us get scraggly in the beard region and some of us don’t wear makeup or even, really, make an effort. Actually, all of that applies to both of us now.

In the last few years Dave went through another sexy phase wherein the top of his beard was dark and the bottom gray. That was a really nice year. Then it went straight to white and somewhere along the line that whole routine of trimming it up every six months whether it needed it or not went by the wayside. I offered to take a scissors to it myself, but somehow something else always came up, and then one day I realized we now have a situation. That situation being my husband has crossed over into Homeless Dude territory.

But that also means, for the first time in his life, he’s right spang in fashion. This is Portland. Portland men get their strength (which they are not allowed to show) from letting their beards grow. They don’t shape them. They don’t trim them. They want to see what they can produce, and they can never be sure until they’ve pushed out as much secondary sexual characteristic as their little hormones can manage. 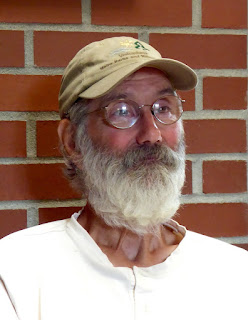 Every now and then you see a splendid beard that is a marvel of architecture but the vast majority run somewhere between curious and repellent. Maybe they’re so sparse the beard looks more like a vapor. Or a bad hedge. Or, frankly, pubic. There’s an entire traveling ecosystem happening on the streets here. Nobody knows what’s in those beards. Could be pizza. Could be Legos. Could be gerbils. And in that illustrious company, suddenly, Dave is looking kind of cool again. His beard is developing some internal shape, is not pubic, gets some wave action going, and is an appealing white rather than gray. Even I’m kind of interested in what else will happen. Right now it looks like his face is wearing a sweater. Down the line, he might develop a cable knit. He’s a creative guy.

And I’ve just noticed, because beards are such a Thing now, that when we walk down the street, he sometimes gets a little personal nod from another bearded man. A little “Nice one, dude.” An acknowledgment. A signal from the fraternity.

I don’t want to take that away from him. I do miss his neck but Marge and Studley might need nesting material. And besides, the homeless dudes don’t ask Dave for money anymore.