Get Thee To A Flummery 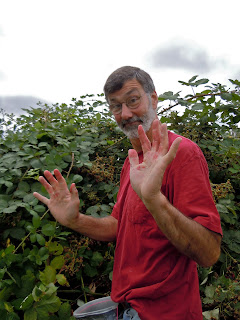 Give me a man with a long reach, size-13 stompin’ boots, and a high threshold of pain, and I’ll give you a blackberry pie. I won’t do it for less.

Western Oregon has a climate exquisitely suited for readers, writers and blackberries, but the blackberries are the most successful. One of the easiest ways to spot a newcomer is if she spots a sprig of what she hopes is a blackberry vine in her back yard and gets all excited. “You don’t want that,” I explain as forcefully as I can, which is to say with a spade and a canister of napalm. 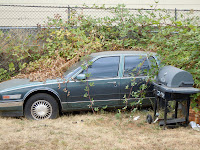 Oh, but they do want that. And so every year, in exchange for permission to exterminate the sprig, I take the newcomers out to a spot–any spot–out of town where the blackberries romp and gallop over the landscape like radio hosts talking over a reasonable man. You can find acres of them in any direction. If they are allowed to root in the neighborhood, however, it is a matter of a few weeks before they have vaulted the fences and arched over your house. You’ll be putting in one last comment on your Facebook page, oblivious to the creeping darkness, and that will be that: it’s 9-1-1, and send in the goats. 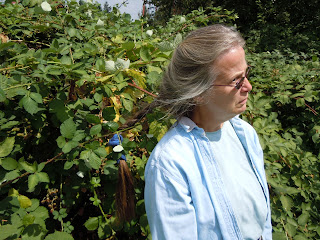 According to the OSU Agriculture Extension Service, there are two thornless varieties. They are located in Sasquatch’s back yard under a thick mulch of leprechaun poo. The rest of them are violent and sneaky and no fun to pick, but they can be tamed into a delectable pie, and every year I haul out the buckets and tell Dave to suit up and off we go. The juice gets all over everything, but it does mask the blood. 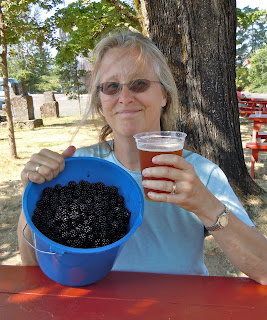 It was only this year, as we played the par-three eensy-beensy golf course at McMenamin’s Edgefield Manor, a sprawling brewery and resort guarded by attack blackberries, that it came to us how to make Operation Pie more enjoyable. The par-three is the only course I’m allowed to play on, because I can’t count high enough to play the others. Each hole is encircled by a blather of blackberries which are chopped back on the hour by the grounds crew, and community-minded citizens from all over plant their golf balls in them in preparation for the winter ball harvest. Because of the aforementioned high threshold of pain, we usually come off the course with a few more balls than we came with, but it never occurred to us until this year that we could come for the blackberries.

The establishment is fine with the idea. You, little man or woman, are no threat to their incidental blackberry crop. Neither is your army. Not even if you’re a goat. You may pick all day from clumps of berries at a comfortable shoulder height, if you wish, and then you can have a beer. And then you can go home and make pies. 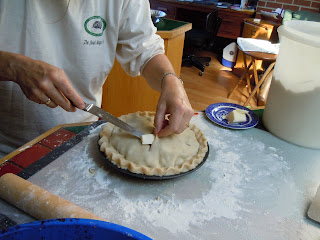 Blackberries are found in a number of items, including cobblers, pandowdies, slumps, grunts and flummeries. (They are particularly prevalent in bear grunts.) Pies are my choice, even though pie dough tests my own threshold of pain. There are only five ingredients in a pie filling; my tradition is to leave one of them out. That is what the slits in the top crust are for: you slide the butter pats through them.

At least now the picking part has gotten easier. Just drive on up to Edgefield, and whatever you do, don’t park too close to the berries.