Getting A Big Head 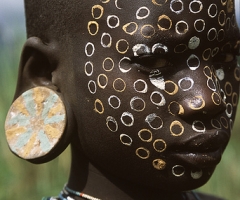 More than any other animal, humans expend a lot of effort on self-decoration. People paint themselves, drill themselves, hang hardware off themselves, and scar themselves up, and they’ve been doing it for thousands of years.

When I was a kid, we were familiar with the practice of inserting plates in the earlobes, because that was depicted in the second-most-interesting pictures in the National Geographic magazines that lived in our father’s underwear drawers. We would never have believed it if you told us that young American men in 2012 would routinely platter their own ears. Sure! Right after they put a man on the moon!

So it’s interesting to speculate on what our platter-headed friends’  own children will be doing to horrify their parents in fifteen years, and what their children will develop in forty. Fundamentally, nothing changes. I cheer myself up by imagining grumpy grownups in 2050 thumping and squeaking as they shake their small-mammal hair extensions, while their kids display the latest in ornamental groin herniation.

I did have my earlobes drilled at the mall in 1967, but the holes have since slammed shut. Mostly I have too much appreciation for the vagaries of fashion to go for something permanent, like a tattoo. The danger is that the things you think are cool when you’re sixteen and when you’re thirty-six are rarely the same things. Oddly enough, I’d have fared all right with that. I would have had a salamander inked onto myself somewhere, and I’d still like it. But I have enough affection for salamanders and their comfort that I would have felt compelled to place my salamander somewhere near a damp crevice, and some people might find that off-putting.

The problem now is that people are having trouble coming up with something new. Or they were, before the advent of the Bagel Head. Some Japanese are now clamoring for the look, which approximates the look of a bagel implanted in the skin just above the eyes. Presumably the effect is subliminal. “I wonder what that woman is like first thing in the morning,” the prospective suitor finds himself thinking, “with anchovies and a schmear.” 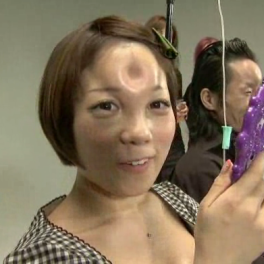 One wonders how these cosmetic breakthroughs occur. In this case, I imagine a nurse tripped over something on his way to set someone up for hydration, and when he came to, he was appalled to discover his syringe buried in the patient’s forehead, which was quickly filling up to Tyra Banks proportions. In his horror he tried to mash the swelling down with his thumb and inadvertently created the bagel, and everyone remarked on how yummy the patient looked. 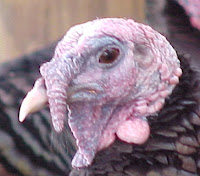 The bagel head is not permanent. After about 24 hours, the saline injection is reabsorbed and the forehead snaps back, returning the recipient to default condition with a tendency to retain water. The practice is still in its infancy, however, and  it is unknown what the effects of repeat bageling might be. It seems reasonable to expect that the serial bageler might develop a little fleshy awning over the bridge of the nose, like a turkey snood, and that’s not ideal. But when fashion shuts the front door, it opens a window. Bring on the tiny-nipple graft, and we’re right back in business.