Give Me A Real Mule 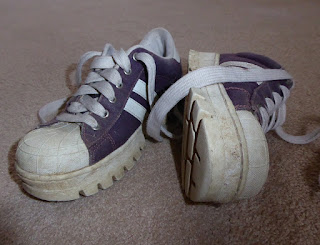 I identify as a woman, but you wouldn’t know it by my footwear. I do not give one cis shit about shoes. Especially Ladies’ Shoes. If this suggests a chromosome slippage, so be it.

Shoe fashion is lost on me. I remember the first time I had a voice in picking out shoes. I didn’t want a voice, really. I was little. Whatever I wore had always been up to my parents. The nice man at McCann’s put my little foot in the metal shoe size thingy and boxed it up like a present. That was fun. Then he looked up at me–me!–and said “Would you like buckle or tie?” I had no idea what he was talking about. I drew a complete blank and I remember it to this day because of the embarrassment of being asked something I had a 50% chance of getting wrong. If he’d asked me if I prefer Plethodon salamanders to Ambystomas I’d have had an answer. I picked one of the words at random and then pieced the puzzle together when he brought the shoe. I was ready for the next time but nobody ever asked me that again. 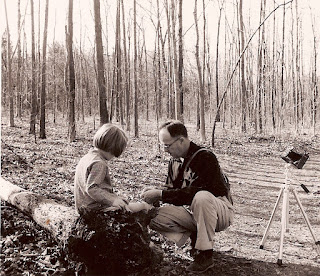 Anyway my shoes were pretty basic. I suspect all my school shoes were brown lace-up types, and Keds or PF Flyers at home, until I got to the awful age of having to Fit In. I’d aged past saddle oxfords. I think I wore loafers. Penny loafers at first and then a pair of tassel loafers. Then the flower-child era freed me from the constraints of needing money to Fit In, and I have no idea what I wore on my feet to school. I can’t remember a single pair of shoes I owned for several decades. To this day I can’t tell you what a mule or a pump is.

Given my antipathy toward fashionable women’s shoes, it was a good deal for me to have been a letter carrier. We wore black oxfords with smooth soles. Period. And they were great, until someone decided we needed waffle soles so we wouldn’t slip on the pavement. Nobody ever slipped on the pavement. What we did do was step in dog shit, which we used to be able to clean off with three scrapes against the curb. But with the waffle soles, we were guaranteed to have to spend company time leaning up against a building reaming out dog shit with a stick. It’s a good professional look.

But our shoes were foot-shaped. You’d think that would be standard, but you’d be oh so wrong. I’ve seen antique ladies’ shoes in the museums. Before the 20th century, evidently women had feet the size of butter sticks. And the left and right were identical. If they weren’t originally, they got that way over the years. I’m not a large person, but if I had to jam my foot in a 19th-century ladies’ shoe, I’d have a blowout.

Put me down for a shoe that looks like my foot. Round at the toe, and close to the ground, just like the rest of me. Would I wear slingback pants? I would not. Platform eyeglasses? No. Cone bra? Maybe.

Supposedly high heels and platforms for both men and women were prevalent in the Middle Ages because there was always so much poop on the street to rise above. But that’s no reason to wear platforms. That’s an argument for learning how to ride a donkey. You sure don’t want to up the chances you’ll tip over in those conditions. These days there’s less shit and more burger wrappers, and platforms are strictly for fashionable effect and Tom Cruise. 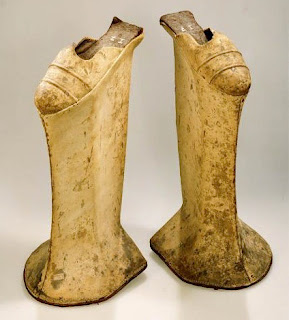 Much shoe fashion, including high heels, had to do with demonstrating that the wearer didn’t have to work for a living, unless you count whoring. It is a sartorial expression of profound and desirable uselessness. If you were an aristocratic woman wearing chopines, you might tower almost two feet higher than you would normally, all of it concealed beneath your gown, and not only were you tall and useless, but you also needed a maid on either arm to prop you up. That is about as useless as it gets.

So upper-class people wore high heels. This principle of showing you do not have to work applied to both sexes. Nowadays we just use ambassadorships.

Modern high heels for women, however, do have a use. That use being the permanent and debilitating shortening of the Achilles tendon in order to accentuate the curve of the calf and the small of the back for the sexual titillation of men plus the signaling of the increased likelihood the wearer will be easy to catch.

I’ll stick with the Keds. I’m still easy to catch.