Go For A Ride? 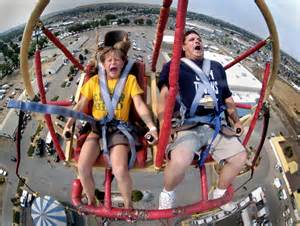 They set up a traveling amusement park on the waterfront for the Rose Festival season. After it’s broken down and packed away, the city crews have to spend several months trying to resuscitate the turf, but this is considered a worthwhile public expense for the peace of mind of having had all those scary teenagers and smelly people penned inside a cyclone fence for a few weeks. We walked by it the other day. Dave looked wistfully at The Big Sling. It’s an expensive ride for a two-minute thrill but it’s probably quite the thrill. It’s the one where they slingshot you straight up into the stratosphere at three times the speed of projectile vomiting. I’d try it with Dave but I have an aversion to sustained really loud noises, and it doesn’t help if they’re coming from me. I still don’t like them.

When I think about it, I can’t remember a single time I have been flooded with adrenaline that I enjoyed.  I don’t even like to be dampened with adrenaline. Every last experience from singing solo to being followed in a dark alley to roller coasters has been a horror. But Dave has recently expressed an interest in doing an amusement-park tour in California. In fact, he wants to go to Disneyland. 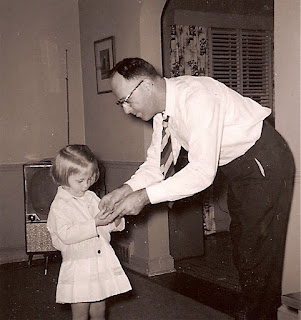 Already there’s a little adrenaline spike involved here. Disney was not allowed in our home when I was growing up. My father had a thing about Walt Disney and when the Wonderful World of Disney came on the TV, even though it was in living color, not that that mattered on our TV, we couldn’t watch it. I didn’t know why at the time, but as an adult I read that old Waltster was appearing before the House Un-American Activities Committee, calling out people for being Communists, and that, right there, would have been enough to keep Mickey Mouse out of our house. As far as I knew, our television didn’t even work on Sunday nights until Ed Sullivan came on. Ratting on people to Joe McCarthy? For an unrepentant liberal man raising a family, that was plenty enough to get you the boot. No Disney; No Mission Impossible (covert interference in other country’s affairs is repugnant); no Hogan’s Heroes (Nazis aren’t funny). So even though Daddy has been dead for 35 years, there’s a little illicit thrill to be had by even thinking of going to the Happiest Place On Earth. 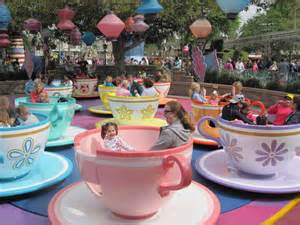 But that’s enough thrill for me. Dave likes the kind of rides that get your viscera going hard in one direction, and their contents in another altogether. The kind that repeatedly lead you to believe YOU’RE ABOUT TO DIE but ha ha! you don’t. Does the Little Mermaid run a waterboarding concession? I’m not interested, so Dave thinks I’ll be a sorry amusement-park companion for him. I don’t see why he can’t flip  himself silly on the Diarrheaton while I cling carefully to the edge of a slowly-spinning teacup, and we go have a beer afterwards and compare notes. But evidently there is great joy to be had in terrifying me right out of clean underpants, and I would be denying him that joy. “Just try it,” he’s going to wheedle, for hours, and eventually I will cave, and I will hate every blasted second of it, and he will be unable to stop smiling. 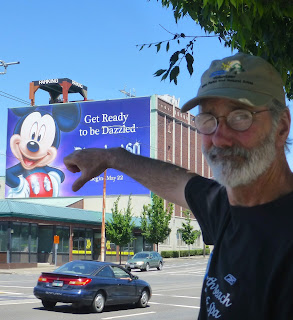 Meanwhile Disney has just hit the news by firing a bunch of their higher-tech employees. They were eased out as a squadron of workers from India was eased in, under a government program that awards visas to foreigners that are more skilled than our own workforce. Of course, the replaced workers had to spend three months training their replacements to make sure they could do their jobs at least as well, so there’s some question about whether their skills were really lacking, but my goodness, the immigrants work a lot cheaper, and it turns out you can put a price tag on that.

“I guess your dad was right,” Dave said, after I showed him the article. We’re liberals too, so we’ll probably have to settle for the second happiest place on earth. As long as it has a roller coaster, please sweet Jesus a teacup ride, and beer, we’ll make do.