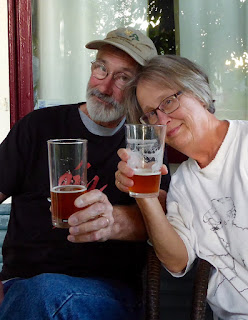 
“Did you splat?” I asked Dave, as we sat on the front porch behind a wisteria veil, pulling in the last of the day, our beers kindled by the setting sun.

No. We were forced to stand up and investigate, and there, at our front walk, splatting was confirmed to be happening, all over the place, great fat fatty splats of water right out of the sky, like God’s trousers were leaking nickels. They spanked dust puffs out of the garden soil; they astonished the pavement.

Serious, world-class, double-wide, fattycake raindrops in the setting sun can cheer a body up like nobody’s business. “There’s got to be a tremendous rainbow,” I said. “To the tower!”

Because the tower is closer to the sky. 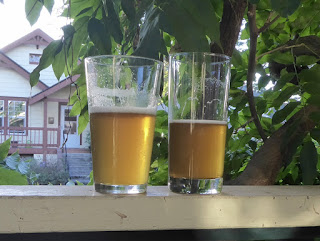 This would be the same tower we hied to when our neighbor Gayle saw us out in the yard a few years ago and hollered out her back door “You all better get inside! There’s a huge storm coming! They said on the radio everybody needs to get inside!”

And so we got inside and went instantly to the tower where we could, indeed, see a huge and energetic storm rolling our way, all pink and gray and whippy and momentous, and with very little hesitation we decided to get even closer to it by climbing out the window and crawling out onto the roof, where Gayle spotted us and commenced hollering again. What she meant was get in the house, not on the house. What she meant was get to the basement and crawl under a workbench in the duck-and-cover position and quiver and get ourselves right with the Lord, until the all-clear signal was given. We stayed on the roof. It was grand.

This time we settled for staying inside, since it was in fact already raining, with the setting sun slicing underneath, and sure enough there was a tremendous rainbow, a real humdinger, the kind of sturdy rainbow that dives straight into the ground in the vicinity of a pot of gold. Like, right over there. 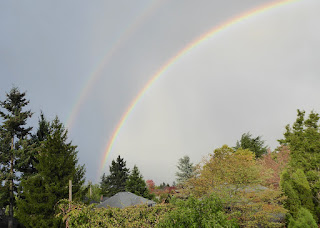 But we know better than to go looking for a pot of gold. It’s like chasing sandhill cranes. Sandhill cranes come hootling out of the sky and drift to the ground with a tilt and a bounce on their clackety stilts and then they stand around gorgeously in a herd. And so you sidle toward them all stealthy like you’re chasing wabbits, and without them moving a gangly leg bone they melt away from you at the same rate you’re approaching them. You never get closer to a herd of sandhill cranes. They like to keep their beauty for each other.

So. Pot of gold, the exact same way. It’s all right. If I did find a pot of gold I’d just trade it in for more rain.