Going Over To The Dockside 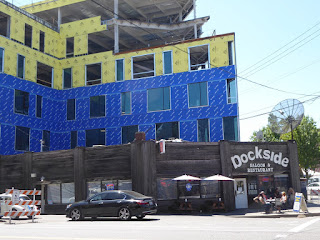 The Dockside Restaurant is a modest pile of old timber surrounded by shine and money, and there are cheeseburgers in it, really good ones, the kind that isn’t presented on a ciabatta roll with large food groups you can’t wrap your teeth around–no. A nice squishy bun and a modest squishy burger, served with a side of potato chips and an RC. And lord only knows why the owners haven’t sold out their precious footage in prime territory yet, but a lot of people are glad they haven’t. You see an outfit like this, squatting like a turd in a field of gazelles, and you just find yourself rooting for it.

So it was fitting to discover that the Dockside’s main claim to fame is its association with Oregon’s own Tonya Harding. Or, more specifically, Tonya Harding’s trash, not to be redundant. We loved Tonya Harding around here. She was a scrappy, hard-working figure skater with thighs that could snap a logger in two, and then pull an Applebee’s off its foundation. She could leap into the air, spin three times, and part out a Trans-Am before hitting the ice again. She had rigid yellow hair and high bangs with enough engineering and product to fend off a tornado. She learned to skate in the Lloyd Center shopping mall, between the Cinnabon and Forever 21. And she was ours, all ours. 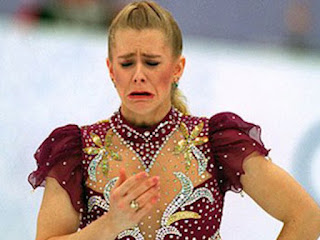 Also, she was not Nancy Kerrigan, a lanky, toothy beauty, and Tonya’s chief rival on the ice. Nancy Kerrigan’s dad was a welder and her circumstances growing up probably weren’t much different than Tonya’s, but we figured we knew a princess when we saw one, and that made us root for Tonya that much more. Tonya was more sturdy than beautiful. She was our Dockside.

So what’s the Dockside connection? When Nancy Kerrigan was whacked in the knee by a large unintelligent fellow, the whole world immediately suspected Tonya was behind it. Our Tonya! But we knew her. We didn’t suspect–we knew for a fact she was behind it. All the perps rounded up were related to Tonya in some way but she herself was held legally blameless, for lack of evidence. No matter: we were her fans and we knew what she was capable of, and we had faith in her too, knowing someone in this crew was going to do something massively stupid at some point, and then they did. She and her friends were heading to the transfer station with bags of trash and got within a mile of it and spied the Dumpster behind the Dockside, and they pulled over and hurled their trash in there, saving themselves the dump fee. 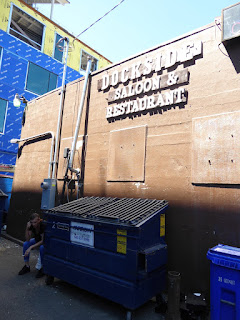 When the owner of the Dockside took trash out the next day, she saw the freeloaders’ offending bags, and did what anyone would do: checked inside for clues to the miscreants. And there was an envelope with handwritten instructions for where to find Nancy Kerrigan and when and where she trained and an “X” where the treasure was and maybe a little “Kilroy was here” drawing. In Tonya’s handwriting.

We didn’t like her in spite of it. We liked her because of it.

Tonya was banned from figure skating and carried on in a state of disgrace we find comfortable and familiar, and her legend lives on, as well as her place in our hearts. It might seem odd to cheer on a dim criminal with no principle beyond expediency, but resentment of the beautiful Nancy Kerrigans of the world can take you a long way. We’re not looking for perfection. We’re offended by it. The elites make us feel bad.

So don’t say we haven’t seen this kind of thing before. Donald Trump is just Tonya Harding with a nice 14-million-dollar bump from Daddy. He’s always going to have his fans.