Good Intentions, But Not Paved 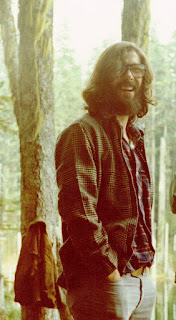 The wild rhododendrons are blooming now. I thought it would be cool to find a good rhody hike. “There used to be tons of them at Plaza Lake,” Dave said.

I’ve been hearing about Plaza Lake and Abbott Road for forty years. They figure in a number of Dave’s disaster stories B. M. (Before Murr). Or possibly it was just one story so traumatic his memory split it into more manageable chunks. He and his buddy tried to turn the pickup truck around on Abbott Road and got the back end hanging off the cliff and they slithered delicately out of the cab and roped it up to a tree and set out walking in their shorts and T-shirts until it got dark and cold and they had to try to sleep in the woods in a more intimate position than either of them would have preferred. And walked for twenty miles without meeting a soul before realizing they’d gone the wrong way. 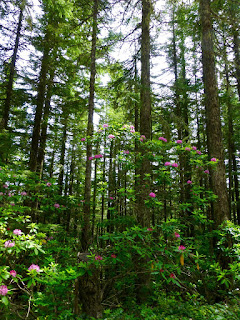 I’d looked it up. It was only a 2.4 mile hike round trip but a very long drive, some of it on a bumpy road. We prefer hiking to driving but we were in it for the rhododendrons.

The directions suggested it was a 100-minute drive from Portland, and that was true, if by “Portland” you mean some place nowhere near Portland, and by “100 minutes” you mean three and a half hours. And it was a “bumpy road” if what you mean by bumpy is “could be charitably described as lunar.”

Once we left the pavement we still had about 17 miles to go. I drove my little red car. It’s adorable. It has a clearance about the same as my vertical leap, or three inches. The potholes were cavernous. The ruts could have been navigated by a gondola. Driving my little red car on this road was like sending a dung beetle across a waffle.

Our sense of adventure kicked in. Who cares how long it takes? We wormed our way up Abbott Road like a hopped-up slime mold. The miles trudged by as if borne on glaciers. Shadows lengthened. We didn’t see a single person. It began to occur to us that if we did get stuck, we would have no recourse but to bail out and walk for twenty miles in the waning sunlight. We decided to try something we’d never done before: we chose discretion over valor. Two short miles from our goal, we turned around. It was just a wide enough spot that we might be seen from the air if we spelled out HELP in pieces of axles. 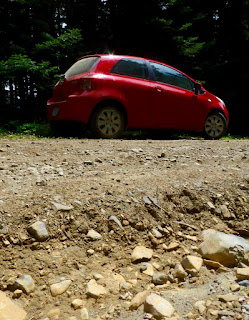 Usually when we take a road like that, Dave’s driving our thirty-year-old four-wheel-drive pickup. I hate it. I ride in the passenger seat weeping quietly and trying not to throw up. This time, with me driving, Dave was a model of serenity. When we turned around he got out and promptly took a dump in the woods. People cope in different ways.

Seven hours after we left, we were right back home again. We could have driven to California.