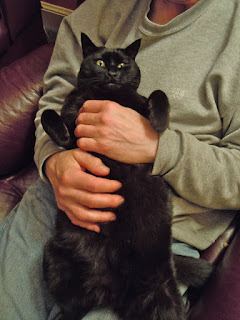 One of the things about our cat Tater, see, is that she is going to make do with just the one life, the other eight being redundant, but it should be a barn-burner. There’s nothing about her that smacks of frailty. She’s big and shiny and hasn’t so much as hacked up a hairball in her entire life–she’s somewhere north of twelve now–and every time we look at her, we think: that, there, is one healthy bag of pudding. Following our house policy, a copy of which I’m sure we shared with her early on, she’s going to cost us next to nothing. Store kibble and the occasional plush toy is going to cover the bill. We’ve had three pets in forty years and haven’t seen the same vet twice, because they start their careers and retire before we come back.

It’s possible that means we might have skimped on vaccinations and dental care, but everyone seemed happy enough. Larry did require a dose of spendy radiation that one time, and the car ride home was quite the event featuring the Devil’s Own Radioactive Diarrhea in a crate and don’t let anybody tell you you can’t do the speed limit on the freeway with your entire head out the window, but she made it to seventeen. Boomer made it to 16-1/2. Tater will outlive us all. We’re trying to figure out how to smuggle her essence into Ruth Bader Ginsburg. 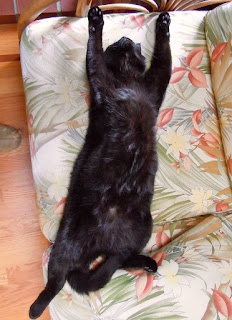 She’s such a font of fine fettle that I have been moved to comment on it despite superstition. “Tater’s going to live forever,” said I, heedless. And we’ve all seen the Hallmark shows and know what happened next. The sneeze.

Only not the adorable kitten sneeze you might expect. This is Tater. This was a five-sneeze drencher.  It pinned our ears back. Rippled the curtains. The sun cast rainbows on the far wall. Well then.

So that’s interesting, I thought, I wonder what sort of dust particle she got into. Was it the Higgs boson? It was concerning, but only briefly. Then she sneezed again. And off and on all day and night. And the next day. “If you’re still sneezing on Monday,” I warned her, “You’re going in the crate.” Tater does not care for the crate. 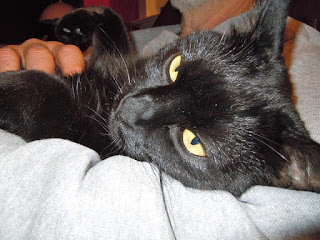 Meanwhile I did a modicum of research and thanks to the gol-durned oversharing Internet I discovered that cats do get colds and upper respiratory infections from other cats, but I discounted that on account of Tater is the queen and sole fur-bearing occupant of this house and isn’t allowed to roam outside. And I further discovered that an upper respiratory infection could also indicate heart failure, feline leukemia, dropsy, the grippe, conspicuous consumption, pox, and hoof-and-mouth disease (rare).


And I was sore afraid. We began to examine her looking for signs of generalized moroseness but it’s hard to tell if a cat that sleeps 80% of the time anyway is feeling peaked. By Monday I had decided she did look a little off, although that was as far as I could take it, and I made an appointment for the next afternoon, gave her the same warning about the crate, and hoped she’d straighten up beforehand.

The next day she was still sneezing. We jammed her into the crate butt first, which is how you turn a bag of pudding into a Ninja throwing star in one second, and we hove off to the vet’s after double-checking the directions. The vet extracted her from the crate, took her temperature, looked in her ears, eyes, nose, and throat, probed her kidneys (“quite smooth,” he said approvingly), prodded at the state of the pudding, and announced that had we not said she’d been sneezing, he would have proclaimed her the healthiest dang cat he’d seen all year. 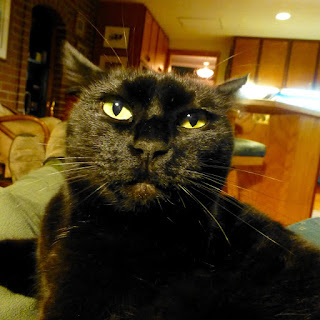 “And she’s down a pound since the last time, but that’s not worrisome,” he said, and I said “Well, we haven’t been here for eight years,” and he said “No, you were here two years ago.” We were? What for? He glanced at his paper. “Sneezing,” he said.

Then he opened up the crate, she strolled inside, he closed it, we paid sixty dollars, we went home, and Tater never sneezed again.

But as she points out, her eyes half-shut but bright, sixty bucks does prove we care.