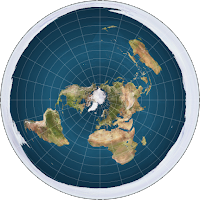 The world was shaken by the death of daredevil Mad Mike Hughes the other day, or at least the portion of it that his rocket smacked into.

Mr. Hughes was attempting to shoot himself 5000 feet into the air in a homemade rocket in order to see for himself if the earth was flat, or more on the rotund side. He was not the sort to take other people’s word for anything, although he might have done well to take a tip or two from rocket scientists.

A former limousine driver, he had not previously succeeded in killing himself despite many attempts to do so, including a world-record 103-foot jump in a stretch Lincoln Town Car.

The generally accepted model of our planet, according to the Flat Earth Society, is a disk rimmed in a wall of ice the rest of us call Antarctica. This closely resembles the design of the United Nations logo, only with ice in place of olive branches, and in fact the UN logo is taken by some to be further proof, for some reason, of the validity of this model. The designer of the logo had to fiddle with it to make it fit on the head of a lapel pin and not leave any countries out.

Flat Earth theory, in contrast, merely has to fit in a pinhead. 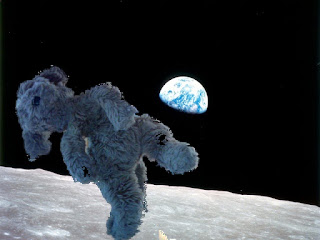 People believe the earth is flat because they don’t want to be the ones hanging upside down from China. Their entire notion of “gravity” comes down to things being either “up” or “down,” and as long as you’re on the”up” side of the disk, you’re in good shape. There’s no suspicion that people might just float off (or “up”). If nothing else, Mad Mike contributed a stunning demonstration of gravity, here defined as the degree to which the disk sucks.

I am among those skeptical that Mr. Hughes was, himself, a Flat Earther. I think he liked to do scary things and didn’t have enough dough to make them happen. I am assuming he was let go from the limousine company after he launched the Lincoln. He had tried to raise enough money to make a crappy rocket in 2016 but netted only $310. Not until he signed on with the Flat Earthers did he reach his financial goal.

In other words, Mr. Hughes claimed to be a Flat Earther in the same way others of prominence claim to be Christians in order to be elected to a position of power and wealth. If Mad Mike had contacted a random Koch brother or Vladimir Putin he could have had the hell funded out of him. They’d be all over that flat earth business. Flat Earth people believe NASA’s space program is a hoax, and anything that leads people to distrust experts, scientists, and government agencies is red meat for a libertarian or autocrat.

The fact is, you can get people to believe any fool thing. Already you have people believing billionaires earned their money, and their shitty kids did too. You could have a president say “I don’t know, maybe the earth is flat, who knows? People are saying that, you hear people saying that. We’ll see.” And whammo, just like that politicians will win office by promising to shim up the world just enough that the icky greasy people slide out of America.

Poor Mr. Hughes. I’m told I shouldn’t make fun of the dead, but nobody says I can’t right up to the moment of impact. In any case I believe it would honor him to have him buried at the very edge of the disk, with the planet rolled up over him like a burrito. This is not currently possible because of the fifty-foot rim wall of ice otherwise known as Antarctica. But the ice is on the way out, happily, thanks to the efforts of more gullible people and billionaires, and he should be easy to maintain in fresh condition at the ice wall until it disappears altogether.