A Great Place To Roost 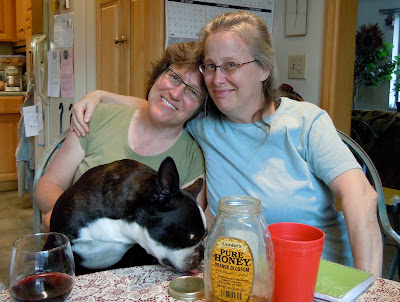 So there I was on the way to the New River Birding and Nature Festival in Fayetteville, West Virginia, when it hit me: I’m Paris Hilton crashing a Mensa meeting. I’m not dumb, but I’m certainly ignorant. There is a difference, but it’s not a practical one. I decided to ease into the birding experience by visiting Julie Zickefoose and Bill Thompson III at their 80-acre sanctuary in Whipple, Ohio. This is like popping in on the Pope to do a little churchin’.

First off, Julie wasn’t even home when I showed up. She was out fetching a sickly barred owl someone had called her about, and had to stop by the store to stock up on sickly barred owl supplements. Unfortunately, that rescue attempt ended sadly, but she had a baby mourning dove handy-by to lavish attention on, and within ten minutes of her arrival she was loading up a syringe of baby-mourning-dove gruel and sending it beakward. So far, pretty much like any other visit. 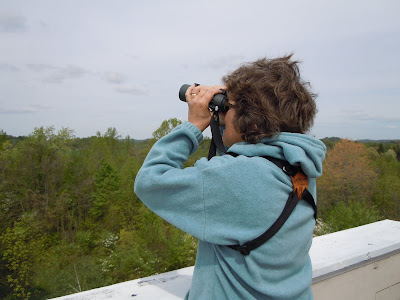 The next morning we were up in the bird-watching tower, scanning in every direction to tot up feathered migrants and mark down their arrival dates. Bill and Julie were swiveling about like radar dishes, pointing out dots on the horizon and extracting strands of birdsong from the general jumble. It was virtuosic, like watching a mercury nucleus naming all eighty individual electrons from the orbiting swarm. To get a rough idea of my demeanor during this demonstration, airdrop a Norwegian into a crowded Mexican marketplace and watch her rotate slowly, trying to locate an identifiable fruit. I concentrated on nearby things. That’s how I found the jelly bean glistening on the edge of the wall. “Ooo, an Eastern Bluebird fecal sac!” Julie sang out. “The babies’ poop comes out wrapped in a little membrane and the parents can take it out of the nest and keep things tidy. It’s all bundled up. Touch it!” No, you. 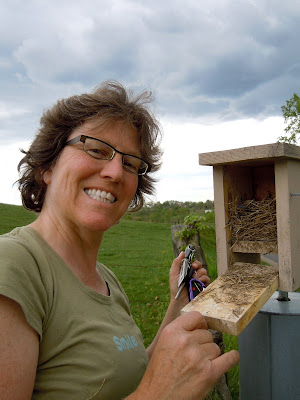 A person can learn a lot tagging after these two. That is why I now know how to find the trail into the surrounding woods. You just follow the line of skunk nose-prints in the mud and hang a right at the turkey poop, and there you be.
The rest of the morning it was just all the normal household stuff–share a bit of oatmeal with Charlie the macaw, make up a new batch of nestling formula and insert it into the dove, toss the breakfast eggshells on the garage roof for the barn swallows to pick up. We gabbled away at the table until the phone rang. “Shoot,” Julie said, hanging up. “I almost forgot. I have an hour interview on NPR this morning and that was my two-minute warning. I’ve got to go to the good phone in the tower–you’re welcome to listen in.” Two minutes later she was live on the radio. That wouldn’t even have been enough time for me to mop up the panic diarrhea.
I was unable to process the notion that Julie wasn’t nervous, so I didn’t eavesdrop, but spent the hour snooping at her watercolor paintings and romping with Chet Baker, the Boston terrier famous for operating a world-class doggie-kiss dispensary. I felt certain he was into the relationship since he had stuck his tongue in my mouth while I was snoring, causing me to drift into college nostalgia dreams. A Boston terrier is a good example of human-engineered canine evolution. He has a small, compact body, dense with compressed affection, and a flat face perfectly suited for off-loading surplus kisses. If humans can start with a wolf and selectively breed something with a muzzle like Chet’s, surely we can develop a dog whose poop comes out pre-baggied. What a fine contribution that would be for the city dog market! You wouldn’t even have to decant your Chihuahua from your purse, but just remove the fecal sacs along with your used Kleenex. 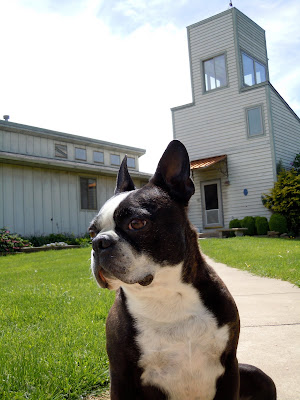 My reverie was interrupted by Julie returning, unscathed, from her interview, and then it was time to re-plump the dove, check the contents of a number of bluebird nesting boxes (she knocks first), and scope out the pileated woodpecker hole. Not his personal hole, but the one he excavated in a tree. And then I sat around with a beer and a dopey smile, watching Julie make a chicken pot pie and fry morels and feed the kids, Bill, Chet Baker, Charlie, and me. Julie is a compulsive nurturer. We are destined for glory, for I am a compulsive nurturee. I fit right in this menagerie, because at the Zick household, it’s just one thing after a mother.
I hope all the other birders are like this.
By Murr Brewster|2021-11-09T21:29:12-08:00May 5, 2010|Uncategorized|26 Comments