Out Texting In Their Field 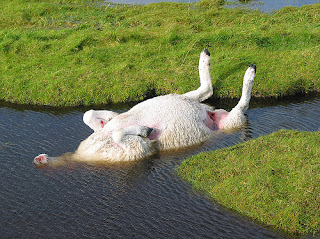 Great technological breakthrough in the field of, um, fields, wherein cows can now be fitted with a device that allows them to text their human caretakers, and it’s just like you’d think: you can’t imagine ever using such a thing, but once you have it, you’re texting like crazy. A similar device is being used in sheep herds so that the sheep can advise the shepherd of marauding wolves and the like. This allows a degree of remote shepherding that really wasn’t possible before. Shepherd gets a text that a wolf is in the fold and he can arrange for a horn blast to scare the wolf away, theoretically, although in practice if he manages to scare the wolf he is likely to find his entire herd with their feet up in the air in a slick of panic diarrhea. Shepherds who cannot afford to buy a good sheepdog especially are interested in the texting technology. Although one might think that texting devices for a good-size herd might run into some serious money, it turns out that you only really need to outfit one sheep, and the rest pretty much go along with what he says.

The cows are capable of transmitting texts concerning their general health and the state of their fertility, allowing the caretaker to get quite a bit more rest (see “fanny farmer”). The ability of cows to text had been thought to be years away. There’s a lot of stuff that needs to be overcome for animals to get any good at texting. Hooves, for instance.

Our cat Tater might well be interested in anything that would make communication easier. She thinks she lives with The Stupids. Every day she asks for the exact same thing and half the time we act like we don’t know what she’s talking about. She would like to play with Mr. Greenjeans. Mr. Greenjeans is one of several rattle-mice she plays with (along with Orange Slice, Goldie, and Professor Plum), only Mr. Greenjeans is attached to a stick with fishing line and we can cast it back and forth for her to stalk and catch. Generally speaking she gives him a good pounce right off the bat and then after that it’s all stalking. There you are, flinging the little green mouse back and forth for twenty minutes, and she’s all hunkered down watching him. From the human standpoint, there’s not a lot of reward, and so she doesn’t get to play it as often as she wants to, which is every minute. 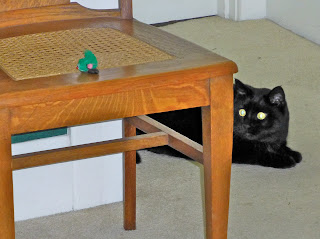 The previous cat, (Saint) Larry, was such a stellar citizen that I was able to overlook her main fault, which is that she wasn’t near as particular as we were about where she took a dump. She would drop a deuce in the litter box if she happened to be walking across it when the urge struck, but otherwise she’d just plant a dookie any old where. She wasn’t trying to make a point. It was just that, as far as she was concerned, the problem was solved when the doot made the exit. So when Tater came along, and right away went down to the basement and found the litter box and put something in it, we gathered around and praised her to the high heavens like she was a five-year-old we were trying to insert some self-esteem into. “Way to GO!” we said, and she looked at us like, “how else do you go?” Tater has no problem with self-esteem. 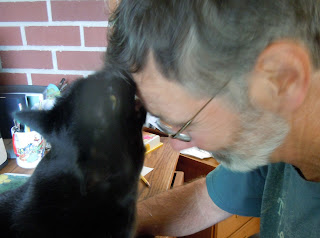 But we would like her to be able to express herself in a different manner. She is very fond of us, Dave especially, and when she gets really worked up about that, she likes to gnaw on our foreheads. She’s never spindled anyone, but the object of her affection could at any time be in for a bit of a denting. Our communication about this has gone nowhere. “Quit biting!” we say, and she says, “I am not biting. I am loving you very much with my teeth.”

So it would be pretty cool if we could set her up with some kind of texting device so she could address us more appropriately. It wouldn’t be too difficult. We could  have it preset to fire off with “I would like to play with Mr. Greenjeans now,” and she could stomp on it all day long. Because she has little feet. 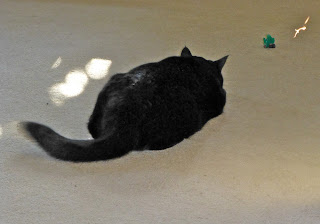 Which was a problem for the cows, at first, on account of the hooves. The breakthrough in bovine communication came when someone realized they only needed to set up the device with two giant keys, “M” and “O,” and then it was Katie bar the door.