I’ve complained before about my inability to recognize birds.  I’ll no sooner get one solidly deposited in the memory bank than I see it again a week later and the best I can say is that I’ve seen it before. It’s, you know–that one. That one. With the little thing on its–hold still, dammit. You know! That one.


Which is why I bake cookies for the Birdathon van. A person should contribute.

But it has come to my attention that many people, maybe even most people, don’t see birds at all. They register only as flitters on the periphery, and unless they’re making some kind of racket, they fly, as it were, under their radar. I realized this when my neighbor, who knew I had an affinity for the little fluffsters, reported with great excitement that he saw a pheasant in the tree outside my window. 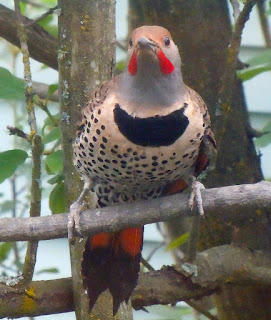 So chalk one up for me: I did know enough to know he did not see a pheasant in the tree outside my window. He went on to describe a northern flicker, which is indeed a fine and fancy bird: a vest full of polka-dots, a necklace, an orange kilt, a red mustache. How my neighbor could have failed to notice such a large, snappy, well-turned-out bird before, even though it is dirt-common around here and perches on the wires going weeka weeka weeka and hammers on his chimney flashing just for giggles and looks like nothing else, not even a pheasant, I do not know.

So I have begun to appreciate that I have managed to accumulate some small measure of ID skills over time. I’m best at the fifteen or so species that are likely to show up outside my window. But I now recognize a ruby-crowned kinglet even when he’s not showing his crown, and also a pine siskin, both of whom were mysteries to me not that long ago. I don’t expect to gain a vast breadth of knowledge, but now I have a new aspiration. I want to be able to tell individual birds apart. You know, my birds. The ones in my tree.

I know it’s possible because Julie Zickefoose knows all her birds by name, and their hat sizes, and whether they’re drop-in people or she should call first, and everything. So when you’re looking at the feeders on her deck, and ask what some bird is, she might say “juvenile semi-mottled snapplecrapper” or whatever, but she might also say “Oh, him? That’s Fred.” Fred looks a little different, or acts a little different. Fred has that arrogant cant to his shoulder, and a quelling eye. Julie knows. She’s got something special in her pocket just for him.

But right here in the small birdscape outside my window, I’m starting to see individuals. I have a female house finch in residence who has cowlicks over both ears. She seems to be just fine but she has these little horns. So there’s one. I probably won’t be able to do this with my bushtits. If I hollered “Hey, Fred” to my bushtits, they’d all go off at once, and that’s just a plain fact. 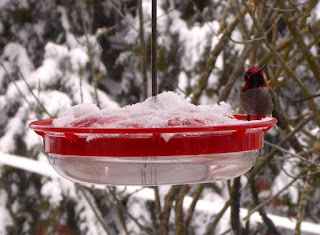 I thought my ability to distinguish hummingbirds would be confined to sexing them, which is easy, because of their hats. But there’s way more going on than that. I don’t like to cast nasturtiums, but this hummer that has dominated our feeder–Hannibal Nectar–is one rotund little ball of holy-hell. He has really packed on the grams. You fry up three of him and perch them on a bed of rice, you’ve got yourself an entree.

But then there’s Noodle. She squeaks in any time Hannibal isn’t looking. And she has the girth of a standard Ticonderoga pencil. She couldn’t beat up Hannibal if she had brass knucklets, ten friends, and started last week. I’m accustomed to the proper size of an Anna’s hummingbird, and there’s variation, but I’m frankly worried about both of these. Soon Hannibal won’t be able to lift off without dropping like a plumb-bob and Noodle could disappear in a shag carpet. 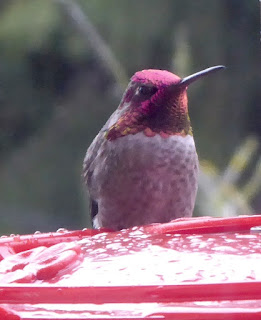 There’s not only a size and coloration discrepancy. They act different. You know how non-cat people think cats are all alike? Right. Well neither are birds, as it turns out. Noodle always picks the port closest to the window so she can look out for the big jerk. She looks left, right, up, down, and then she lowers the hose in and sucks out everything she can. (Birds do not actually suck. They’d need lips, and they’re all notoriously slim about the lips.) Hannibal comes way more often and drinks less at a time, because he knows he’s in charge. He picks any port he wants and kicks back like he’s in a recliner. But he’s also the only hummingbird I’ve seen that makes a regular habit of checking out the nectar feeder from underneath. I know what he’s doing. The fat little fuck is looking for Cheetos in the seat cushions. 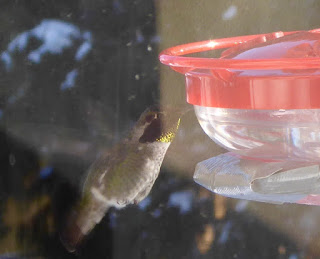 Poor Noodle. She should be making a nest soon, and I hope she’s real cozy in there, because that’s one place she can get away from Hannibal. I’d love to bring her a welcome-wagon gift. Maybe a nice spider pot pie.