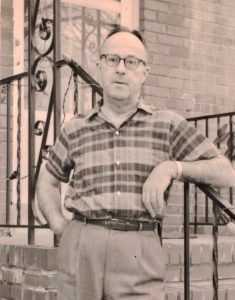 Curmudgeon: a crusty, ill-tempered, and usually old man. I just looked it up. As usual, I had it sort of wrong. I thought it was someone specifically crusty about the use of language, because that’s what my dad was, and God knows he was a curmudgeon. But you can be curmudgeonly about almost anything: the crust is the point.

Dad could also be a curmudgeon about politics, of course. But all that eloquent grumbling of his went straight toward the TV set, so we didn’t have to feel personally under attack. We weren’t personally under attack. Dad got pretty heated up when the Vietnam War was ramping up, or when Nixon had anything to say about anything. Lordy. He’d roll off a perfectly structured and lyrical lecture right on the spot with no edits needed, as if his words had slid in a slab straight off Mt. Sinai. I miss the old grump but I’m grateful he isn’t alive today or he would have burst into flame.

All us kids were pretty good in the language department because both our parents spoke well, and when we erred, we were corrected. Drilled, in the case of the correct usage of “comprise,” but that’s because that one is particularly easy to mess up. My father was never so rude as to correct anyone’s language in public but we’d hear about it in the car afterwards. He simply had to unload. “It’s FORmidable, not forMIDable,” he’d thunder. “It’s fawken, not fal-con.” “This is what you get,” he’d grouse, “when people only read, and are unfamiliar with the spoken language.” I’m not sure the fact that people read should be a strike against them, but whatever.

Anyway, I’m not nearly as riled up about other people’s misuse of the language as he was, but some of his crotchets remain with me, unbidden, like those little splinters in your underpants you can feel but can’t find or tweeze out. Something you should be able to ignore but can’t quite. I’m no curmudgeon, though. Which is to say, I judge silently. In fact I have never been an irritable person. True, for a long time there I noticed other people became very irritating for a few days out of the month, but that was hardly my fault. 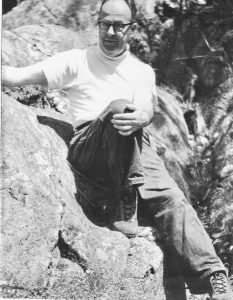 Well, some are born curmudgeonly, and some have curmudgeonliness thrust upon them. So I still wince inwardly whenever someone says something that would have bothered Dad, even though I might otherwise have ignored it. Blanche, an erudite woman of my acquaintance, was infuriated by the word “crispy,” which baffled me. “Crispy. It’s, you know, like when something is especially crunchy and delicious,” I offered.

“The word is ‘crisp,’” she snapped off, crisply. Oh. By gum. She’s right. Now I can’t hear the word “crispy” without taking on some of Blanche’s pique. Damn. Another splinter in my underpants.

It’s taken me a while to get my own personal portfolio of peeves. I’m old-fashioned. I still have conversations about things, not around them. I still wait for people, not on them. (Not after the Friendly’s Ice Cream fiasco of 1972.) I still give people things, I don’t gift them things. The other day the Washington Post had a headline “Gifting a Gamer? Consider these tips,” by which they presumably were saying “Are you planning to give something to a gamer?” and not “Are you planning to give a gamer to someone else?” Although, who can tell anymore? We’re living in a time when basketball players are said to defend their opponents. Okay.

All of these are lost causes. They’re just the burlap underpants of life, and with the laundering of time, they might smooth out eventually. I figured I was finally maturing and not sweating the small stuff. Until this stupid casino opened up to the north. Big fancy place, I guess, and they wanted it to sound exotic and sexy, so they made up a name: Ā-lan-ā, they call it. Come play at Ālanā.

They spell it Ilani. Oh no you the hell don’t. You don’t get to do that. You can’t name your casino Ilani and pronounce it Ālanā.

Now where the hell are my tweezers?