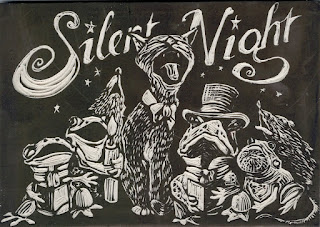 “Let’s go caroling,” Dorothy said, and it sounded like a swell idea to us. We had a group already. We got together every month or so to sing madrigals.

Not that we sounded all that good. Dorothy was an A-1 soprano, sweet and true and lacking that bellicose vibrato that would get a lot of sopranos swatted if they weren’t so scary. The rest of us were of a lesser grade. We had one voice for every part including first and second soprano, and at least you could tell which of us belonged where, because we usually drew inside the lines of our ranges, although some of us scribbled. It was a lot of fun to get together and do all the fa-la-la and hey-nonny-nonny: a lot like a recorder group, in that it was way more fun to be in than to listen to. 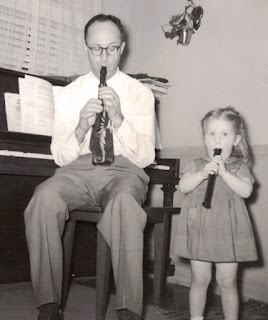 We scavenged some other volunteers and we met at Dorothy’s apartment in NW Portland. There was some discussion concerning how to go about this thing. This was forty years ago, and yet caroling was already old-fashioned by then, and we weren’t sure if there were rules. Finally we decided to go up to the first house we saw and ring the doorbell. We didn’t want to seem disorganized, so we agreed on a carol and the number of verses, first. We rang the doorbell.

“Just a minute,” came a forlorn baritone, followed by shuffling sounds, and doors banging shut, and locks opening, and finally a large, morose, unshaven man appeared at the front door, still working his way into some scuffs, and clutching a bathrobe shut with one hand. Oh boy, we thought. The first recipient of our cheer! And off we went into Joy To The World, in four-part harmony, our bright holiday mufflers wrapped tight, our wool caps jaunty, as the night chill ruffled his leg hairs. Heaven and nature sang, and sang, and sang, and then danged if The Lord didn’t go right on and rule the world with truth and grace; our victim sagged visibly; in reconstructed memory, the man grew shorter and shorter and may have sprouted a thermometer; he was approaching panic as we repeated the sounding joy, and repeated, and repeated it; what were you supposed to do with carolers? Somewhere in his childhood pre-Depression memory he was certain there was a protocol, his mother would have known, there was supposed to be mulled wine, or baskets of cookies to dispense, but isn’t just this kind of thing the reason he’d gotten a place by himself in the middle of the city? The ghost of gratitude flickered on his face as we appeared to be winding up, but no, we had a plan, and no mutineers; we finished up with We Wish You A Merry Christmas, complete with the good tidings to him and his kin, which were not strictly necessary, and we bid him adieu.

Well. That left something to be desired. It wasn’t at all clear that any joy had been transmitted. We amended our plans to merely loiter outside the next house and not knock at all. We decked the halls, or something. Fingers pulled the Venetian blinds slats apart and then shut again. We decided to just walk down the sidewalk and sing as loud as we could. One carol after another. It was fine. After all, people had had TV for decades by that time. Nobody could be expected to know what to do with an authentic caroling assault. Then we came upon one of those U-shaped courtyard apartments that prevailed in that quarter of town. We walked into the center of the courtyard and we Had At It. We Let Fly.

Hallelujah! Relieved of sole responsibility for properly appreciating unsolicited carolers, people opened their windows. Leaned out. First floor, second floor, third. Smiled. Clapped. Gave thumbs up. Joined in. The acoustics were tremendous: we sounded good, and not just Dorothy. One or two residents were crocked enough to invite us all in for some version of a toddy. We declined, but it was nice to be asked. Hey nonny, nonny, it was nice.