Have Gloom, Will Travel 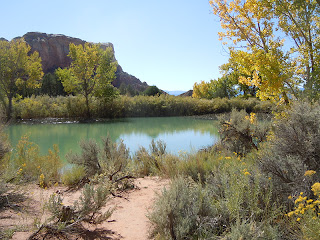 Your human brain is remarkable in many ways, but a lot of what makes it remarkable also makes it very wrinkly, and that means it requires some upkeep to keep it moist and in tip-top shape. The wrinkles are prone to filling up with lint if exposed to too much drudgery, despair, or television. For proper maintenance, the brain needs to have beauty pounded into it as often as possible. You never know when you’re going to need it later. That’s why we hike the alpine meadows of Oregon, and that’s why we just went to New Mexico.

My friend Melissa lives there, in Los Alamos, so we figured she should know some stuff. She advised us what to pack: “t-shirts,  a lightweight long-sleeved shirt for layering, shorts, sunscreen and maybe a pair of long pants–it gets cool at night sometimes.” On my own initiative, I added eight pairs of underpants to the list: one per day plus an oopsie pair for burrito country. And off we went. 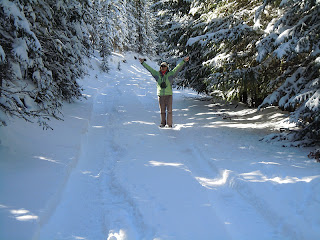 The day after we arrived, it snowed. I put on all seven t-shirts, all eight pairs of underpants, and an expression of betrayal. “It’s unusual this early,” Melissa admitted. “But the great thing about New Mexico is that even when it’s cold in the winter, the sun’s out. We don’t get that overcast you all do.

That evening a weighty fog rolled in and erased the nearby canyons from the landscape. It’s a common thing to accuse visitors of having brought weather with them, but it’s generally meant in jest. Dave and I eased our rain gear over our underwear collection and strode like rubbered shmoos through the familiar gray pall to the grocery store. There, shoppers sulked under the awnings and peered out with bafflement and alarm, as though something had gotten loose from the Los Alamos Nuclear Laboratory. Slowly, wary eyes turned towards us. We had carefully scrubbed the moss off our north sides before leaving home, but we looked suspiciously comfortable. Frankly, I thought maybe we’d brought it with us, too. 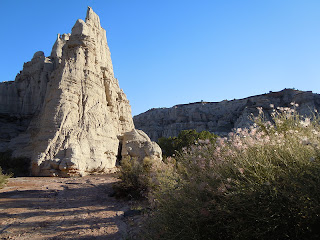 Our powers lasted only a few days before the sun reasserted itself, and we huffed our way around the landscape, much of which had been pushed up above 10,000 feet and then left there, for no particular reason. Dave reassessed and concluded we hadn’t brought the weather, because if we had, we would have thought to bring some air with us as well. As he explained breathlessly to passing hikers who looked at us with concern, where we come from you can actually see the oxygen molecules. They’re all over the place. 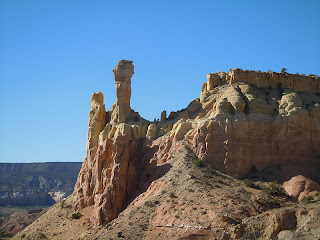 New Mexico and Oregon are both beautiful in opposing ways. Western Oregon has just as much geology as anywhere else, but we keep it demurely draped in greenery. In New Mexico the geology is buck-ass naked. It has tipped and rocked and rolled and been stripped and blown and it doesn’t care who’s looking. We gaped like Lutherans at a bawdy-show.

Still, it was colder than advertised. We intended to go to the high mountains and look at turning leaves, but it was already half-past aspen and a quarter to winter up there. Well, as the saying goes, when God closes a door, he opens an all-night donut shop. Branches may have been bare, but much to our surprise, we got a glimpse of the rare Alpine Snow Poot. Meanwhile, at lower elevations, plucky plants scribbled all over the terrain, their main feature being their ability to hold water, and I admire that, especially since menopause. They clutched and clambered and flowered ferociously, sparking under the broad, broad blue: desert in session, Ubiquitous T. Raven, presiding. 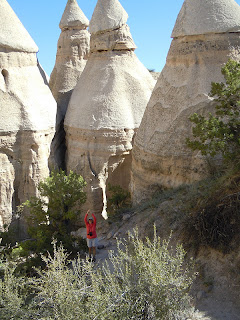 A word about the cuisine. Wherever you go, the menu will list lots of ingredients that you don’t recognize. You took French in high school and that’s all well and good for finishing crossword puzzles but it isn’t going to help you here. All  you need to know is that all of these words are interchangeable and may refer to something in the pepper family, something in the meat family, something in the bread family, or cheese.  It doesn’t really matter what it is, because it will all look exactly the same under the camouflage sauce. The meat family may include items customarily discarded by your home butcher. The only thing under your control is the color of the camouflage sauce (red or green). Your best bet is to scan the ingredients for signs of Latin roots referring to insects, and then order the Menudo con papadzules, pepitas, poblano rellenos, burro bits, cacahuete and roasted corn tracers in mole sauce with achiote “ricky” recado. This is either pig lips and little squiggly ambush peppers rolled into a bread product, or it is minced nostril and allergens stuffed in a pepper the size of a buttock. The cheese is directly under the camouflage sauce and its function is to expeditiously remove the roof of your mouth, which may then be placed to the left of the salad fork. You really can’t go wrong. It will all be delicious. Also, order water. You should drink lots and lots of water. Beer is practically all water. 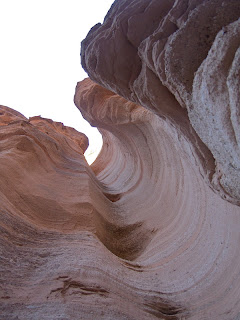 Speaking of lips, my own sheared off in papery shreds and are resting on a canyon floor somewhere, where industrious lip-scavenger beetles are using them to line their nests. Water is scarce in this country, because no one is keeping an eye on it. I’m as guilty of inattention as anyone. I kept pouring a bunch of it into myself and it kept vanishing in some way I’m not familiar with. After a week my hair couldn’t be contained without baling wire and the mummification process had begun. It was a splendid trip, but we got home just in time. It’s raining here. Good lip-growing weather.