He Did It His Way 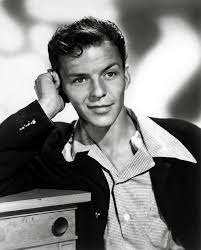 It was Frank Sinatra’s 100th birthday a while back, and he was all over the radio, careening toward one note after another–don’t worry! He didn’t actually hit any of them!–and after a while I was bored in general, and real bored with Frank,  so I went ahead and typed on my Facebook page that I just didn’t get what’s so great about Frank Sinatra. Hey. I was bored. It was the middle of winter and there weren’t any hornet nests to poke and the bears are all asleep.

It’s a matter of taste. If we all had the same taste, it would be a middle-of-the-road world out there. The Velveeta Underground: all Eagles and Michael Bolton with Cheez Whiz and a side of Christmas albums. I could have written “I really don’t get why anyone would put pineapple on pizza” and engendered a spirited exchange without anyone sizing me up for concrete shoes.

But Frank Sinatra is very nearly a religious figure, and that makes him dangerous.

Well, you like what you like, and I don’t necessarily like the things I’m supposed to like. Like, for instance, jazz. All smart people like jazz. I like the old kind. But not the kind where a few people are playing in a room so smoky it gets pressed right into the vinyl and they’re going head to head in keys they’re making up themselves on the fly, and they take turns busting into a solo riff just stuffed with notes and they’re hanging onto coherence by one thin opiated thread, and it’s pure genius–that’s what everyone says. But I can’t follow it, and I feel stupid, because I’m sure they’re right. 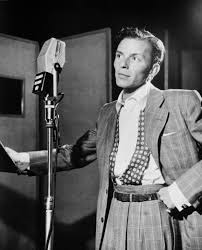 Sinatra I just don’t like. I understand that he’s a master of phrasing, the song stylist of all time. He has his own signature way of getting around to a note. It probably was a natural outgrowth of his early attempts to locate the note in the first place. It’s around here somewhere, young Frank thought. I’ll just slide around until I find it. And it will be that much more thrilling when it turns up.

Everyone agreed it was a thrill. Whoa! Did you hear how close he got to that note? That’s how you style a song. But for me, even his approach doesn’t make up for the actual quality of his voice, which I find unremarkable at best, and tight and annoying at worst.

This goes way back. We weren’t a Frank Sinatra family. We didn’t have to be–we were Lutherans. The few LPs we had included Mahalia Jackson and Odetta and Leadbelly. The entire crooner scene with its bip-bap horn section was foreign to our DNA and we rejected it. It meant cocktails and cigarettes and immodest evening wear and sly innuendo. It meant getting a new Olds every year and belonging to the country club and the Lodge and owning a fez. It meant liking Ike and not Adlai Stevenson and it meant hating commies and being okay with the Coloreds as long as they were Nat King Cole or Sammy Davis Jr.

Humph. My dad was even older than I am–yes he was–and  he didn’t like him either. I began to object, and then someone tried again to explain the attraction and included a youtube snippet and something about it all began to sound familiar. And that’s when I realized I had poked the very same hornet nest a few years ago and generated the very same thread involving many of the very same people. I’d done this whole thing before and I didn’t remember it.


I don’t know how much older you have to get than that.