He Worked Hod For A Living

“I put a brick in your garden,” Dave said.

I wasn’t sure what to do with this information, but he appeared to be waiting for a response.

He did. There was an air of expectancy. I looked up. Dave is a brick guy, after all, and has a certain personal aesthetic.

“You should go look for it. It’s hidden,” he said. There were a number of things I could have been doing at the moment. I wasn’t doing them, but I still wasn’t up for finding a brick in a garden spanning two city lots.

“Hidden in plain sight,” he wheedled. 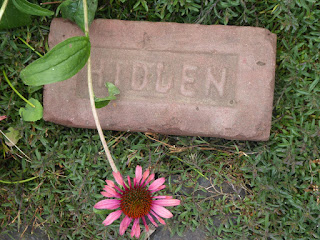 We settled for my vowing to keep an eye out for it in the course of my usual wanderings. And sure enough, a week later, I found his brick. In plain sight. It said “HIDDEN.” Pretty long wait for a punchline payoff, but hey.

A few months later I found another brick. This one said “E J JEFFERY 1871.” It gave me a sense of foreboding. One HIDDEN brick is one thing. You can see the point of that. Two special bricks, and we’re getting perilously close to having a collection. I wasn’t sure we needed a brick collection. Or if there was such a thing.

My dad used to say that no matter how obscure an item seemed to be, you would discover that there is a whole society devoted to it, with a membership roster, and collections of it all over the world, an associated magazine (“Scurvy Scraper Monthly”), and a thriving exchange market. And he didn’t know nothing about no internet.

I looked up E J JEFFERY 1871 and instantly found out Mr. Jeffery owned a brick yard in Portland, Oregon and that he supplied brick for the courthouse and they were all stamped 1872. Not only that, but his brick yard had been located on my old mail route. Not a trace of it remains, but even now a building can be demolished and a new one erected and two weeks later you can’t remember what the old one looked like even if you walked by it every day. Could it be Dave’s new brick was valuable? That the famous brickmaker who built the courthouse had a rare, earlier model? It didn’t take too many more clicks to discover that Dad’s observation held true. There are brick collectors. 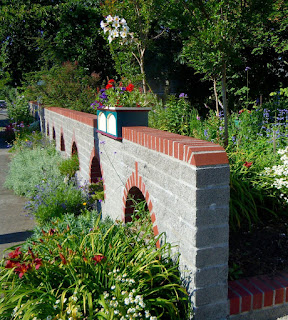 Now, a brick collection can be a fine thing, if it is assembled into a useful and attractive wall. Dave had accomplished that very thing twenty years ago. It’s possible he doesn’t get the credit from the neighbors he should have. He spent most of the summer hand-grading the perimeter of the yard, which involved removing obstinate roots, sieving out bucket after bucket of cobble from the old Ice Age Floods, forming and leveling a footing, pouring it in sections as time and the demands of paying work dictated, fashioning forms for arches, removing the footing forms, estimating and ordering block and mortar supplies, setting up work stations and stocking planks, and finally he assembled a crack team of bricklayers and made 5,000 sandwiches and whammo, all in one day 300 feet of wall went up around our yard. “Your friends sure do get a lot done in a hurry,” one neighbor observed, and I, being familiar with the man, could see the whole thought process written on his madly blinking face: whereas I dug and scraped and sweated and did all this and hauled all that all summer long and all they had to do was show up, butter some bricks, stick them on top of each other, and drink beer all night, but I believe his actual words were “Yes Ma’am.”

I checked. Dave’s bricks aren’t valuable and he hasn’t accumulated any more of them. We’re holding steady at Two. I think we’ve dodged the collection bullet.

We, personally, are holding steady at 36. Happy Anniversary, Dave!