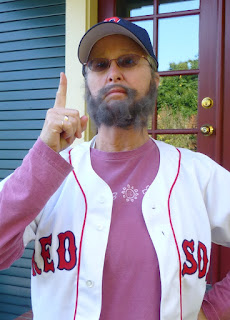 I think it can be safely said, now that the Red Sox are in the World Series, that God is involved in sports once again, but it’s hard to hold his attention for long. Nevertheless efforts to engage him continue to be made on the playing field.

Gestures change with the times and it’s hard to keep up. We’re starting to see the end of the double-fist-bump on the heart, which is good, because I’m always worried it signals palpitations. That’s a general salutation anyway, not directed toward the Almighty so much as one’s fans. But it’s nice and short, and the shorter you keep these demonstrations, the less likely the game will be delayed. Experienced practitioners can whip out a sign of the cross between the wind-up and the first pitch. It signifies that the batter is from the Dominican Republic.

You don’t see a lot of genuflecting on the field, though. This should be left to catchers, who have springs for knees. Again, it is important to speed up the gesture and not linger overlong with one knee on the ground, lest the player be mistaken for a black man with an opinion, which is something black men are not licensed to have in this country. If you’re at all arthritic you shouldn’t even try.

We do not have a surfeit of Muslim baseball players and it’s just as well. There’s no way to speed up the prayerful position, even if it occurs naturally during a slide into second base, inasmuch as the player would then have to ascertain which way is west and point his heinie in that direction. It’s a tough call in a domed stadium. 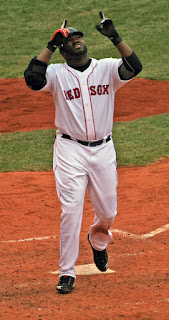 I do think we are achieving the ultimate efficiencies in God-acknowledgment with the current fad of looking skyward while pointing one index finger straight up. The message being sent here is something along the lines of “glory be to God on high,” which is certainly how I would feel if I ever landed on first base with a solid hit. (My usual reaction is “holy shit,” actually, but that’s close.) So far God has not seen fit to install me on base except on a fielder’s choice and that’s not the kind of thing people like to give God credit for; not disease or hurricanes or dropped pop flies either, although I would imagine he’s equally responsible for those.

The specificity of the direction is interesting. For many people, God has an actual address, and it is almost universally assumed, at least by Christians, to be located “up.” If a baseball player hits a triple and points somewhere over the horizon, everyone in the stands would turn and look in case there was an incoming asteroid or something. If you think about it, if all the Christians in the world pointed up at the same time, the whole globe would be bristling with fingers going every which way. Which makes sense, if God is indeed everywhere.

For behold, the kingdom of God is within you, or so I recall from my early training, though nobody wants their baseball heroes pointing at themselves even though they made a spectacular play and have worked hard to hone their skills for years and years. It’s just not done. But many ascribe to the notion that if God exists, he exists in each of us, and so it might be nice to level a finger at your teammates, especially if one of them just winged you the ball from a rolling horizontal position just exactly where you’d need it to tag the runner. There’s no better explanation for a play like that but that God is directing things from the vicinity of that person’s chest. Go ahead and point.

As long as he’s not a Yankee.